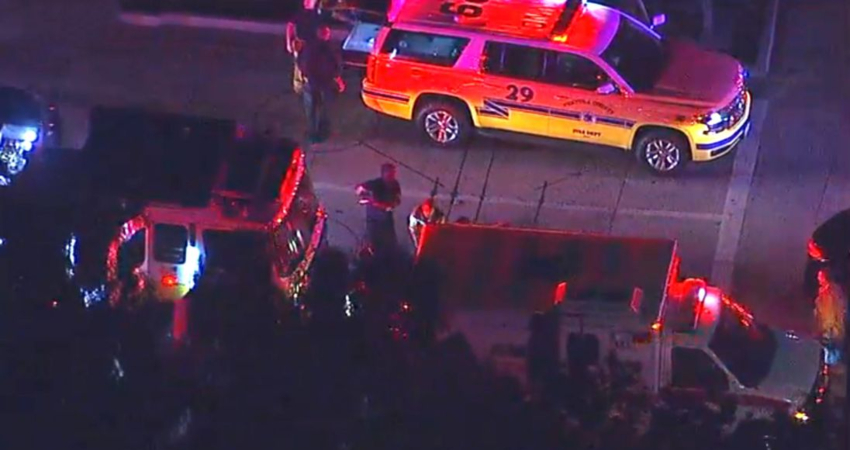 A mass shooting at a Thousand Oaks night club in California left at least half a dozen people wounded, including a Police officer, authorities said Thursday morning.

During a press briefing, Capt. Garo Kuredjian said they confirmed at least six people were injured, including the officer.

“We’re still looking for the shooter. We can’t confirm the shooter is in custody at this point,” he said.

Witness John Hedge, of Moorpark, said he saw a suspect throwing smoke bombs into the front of the restaurant. He also said he saw a security guard get shot.

“I was at the front door and I was talking to my stepdad. I just started hearing these big pops. Pop, pop, pop. There was probably three or four, I hit the ground. I look up – the security guard is dead. Well, I don’t want to say he was dead, but he was shot.

“He was down. The gunman was throwing smoke grenades all over the place. I saw him point to the back of the cash register…and he just kept firing. I ran out the front door,” he said.

Hodge added that there may have been about 12 shots by the time he got out of the door.

He said the gunman had a beard, wore a hat, had a black jacket and may have had glasses.

“I thought it was a joke when the shots started firing. I know people there. I hope everybody’s OK. I don’t know how I didn’t get shot,” the man said.

Mass shooting reported at Bar in California
Share
Subscribe to our newsletter
Sign up here to get the latest news, updates and special offers delivered directly to your inbox.
You can unsubscribe at any time

Count me out of Oshiomole’s travails, says Amosun after meeting with Buhari