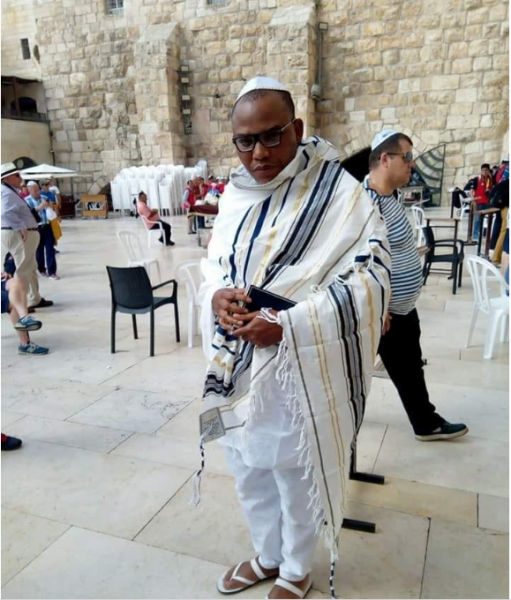 Nnamdi Kanu, the leader of the Indigenous People of Biafra (IPOB), on Sunday said the group will take a deadly and unforgettable revenge against the Nigerian state and members of the Military behind the attack on his residence in Abia state on September 14, 2017.

In a broadcast from his hideout in Israel, the fugitive leader offered condolences over the martyrdom of a number of beloved compatriots in the attack and said it will spare no effort to punish the perpetrators.

“I have returned full-time and I am coming home and I will bring hell with me, he said.

“The Army of the Zoo killed my dog, Jack and few other people in my compound. I am sorry for what my sureties are passing through, but I want to assure them that they will have a special place in Biafra.

“I promised the Zoo that I will be coming to Biafra and I came. I do not recognise the court of the Zoo. I want the people of the Middle Belt to rise and join IPOB.

“IPOB Military intelligent evacuated me from my compound, when the Army of the Zoo attacked me. I am in Israel and the efficiency of MOSAD will be replicated in Biafra. We shall hunt everyone down to avenge the death of IPOB members.

“The Governor of Abia State directed the assault on my father, who is a Monarch. I thank Donald Trump and the government of Israel, who stood by IPOB in our time of need. I thank Prof Ben Nwabueze who stood by me.
“I shall not be honouring the Court. The notion that I jumped bail is a fallacy in Law. I did not jump bail. On the 14th of September, 2017, the terrorists of the Zoo came to kill me. They know if I go to court Nigeria will burn and I was forced to leave. I did not jump bail.

“The Zoo called Nigeria cannot jail me. I will fight till the last day. Binta Nyanko court failed to ask the Nigerian Army why they invaded my home. Nigerian court is a Kangaroo court. I did not jump bail. I left because the court failed to protect me.

“I am not a Nigerian. I already renounced Nigeria in 2015. I am a Biafran with British nationality. I cannot be tried by a court I do not recognise. I do not recognise Nigeria. I can only come to the court with UN supervision.

“IPOB will liberate Biafra and we will not take part in any election, until we get a referendum and this is not negotiable. We will achieve this by every necessary means. We thank Isreal for all the contributions they made to IPOB.

“I owe my survival to the State of Israel.

“I decree that there is no longer South East or South South Nigeria. It shall be known as Biafra. Without referendum, nothing will happen in Nigeria. IPOB will not participate in any election and that position will never change.

“IPOB is the largest mass movement in the whole world. We will not stop until Biafra is fully restored.

“Chukwu Okike Abiama has assured me that Biafra shall come. All collaborators will feel the full weight of the anger of the Biafran people.

“I am coming back to Biafra land soon and I will bring hell with me, the way it has never been seen before.”

“I want to send my solidarity to Ayo Fayose and assure him that Biafra will stand by him in this hour of need. We will have a special place for him in Biafra.

“I thank all my sureties that stood by me. My unavailability was forced on me, he concluded.

A previous unilateral declaration of independence by the Igbo people in 1967 sparked a brutal 30-month civil war that left more than 1 million dead.

Questions have been raised about how Kanu was able to get to Israel, as he had to surrender his Nigerian and British passports after his arrest.

In 1970, after nearly three years of fighting, Biafran soldiers, who were outnumbered 10 to one by federal troops and under-equipped, laid down their arms.

The conflict caused an estimated million deaths, many of them by starvation after the secessionist region was blockaded.

With surrender went their dreams of a separate state for the Igbo people, who are the majority in the southeast.

Half a century later, Biafra remains an extremely sensitive subject in Nigeria.

IPOB Leader Nnamdi Kanu
Share
Subscribe to our newsletter
Sign up here to get the latest news, updates and special offers delivered directly to your inbox.
You can unsubscribe at any time