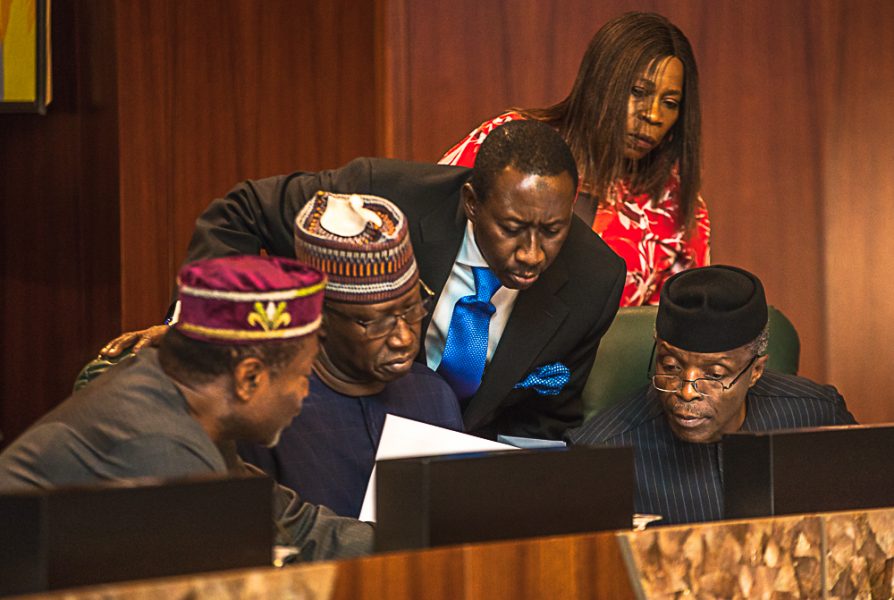 The National Economic Council (NEC) presided over  by Acting President Yemi Osinbajo, has approved the constitution of a committee to be headed by the Inspector-General of Police (IGP), Ibrahim Idris, to come up with recommendations on fresh moves to decentralise the Nigeria Police.

This was part of the decisions reached at the council meeting on Thursday at the presidential villa, Abuja, as part of the measures being put in place by government to tackle the numerous security challenges facing the country.

This followed a presentation made to the council by the National Security Adviser (NSA), Major General Babagana Monguno (rtd.) on current security challenges across the country, particularly in the North West, North East, Middle Belt, South East and South-South.

Briefing State House Correspondents at the end of the monthly the NEC meeting, Monguno said decentralisation of police would aid greater access to information unlike the current centralised approach.

Other members of the committee are representatives from Zamfara, Ondo, Plateau, Ebonyi, Katsina, Edo and Borno States.

Monguno briefed that council on efforts being made by the Federal Government and urged the State Governments to support Federal Government efforts in dealing with the challenges in their respective States, particularly those with local perspectives.

He assured that the Intelligence Community and Security Agencies will continue to sustain current efforts to mitigate the security challenges across the country.

The NSA said council decided that cases of bandits should be prosecuted and adequately publicised by the States and Attorney-General encouraged to personally lead the prosecution.

Asked why there was lack of coordination among the nations security agencies following the siege laid by the police on Benue state House of Assembly and that by the Department of State Service (DSS) on the National Assembly, the NSA blamed the situation on inter-agency problems, saying because of that, it has not been easy to coordinate them.

But he assured that the issues are being addressed and it had resulted to improvements in the situation.

Monguno said, “On lack of coordination, it is not easy to coordinate. Yes, all security agencies are supposed to be centrally coordinated but sometimes we have issues. But these issues are being addressed right now and that is probably why we are beginning to see some improvements.

“My office has been trying to address in the last couple of weeks, hopefully we should be able to see some improvements.”

Speaking on his presentation, Monguno said, “I gave a general overview of the current security situation in country and all the trends that we are confronted with are becoming increasingly asymmetric in nature and l stressed upon the need to deal with these problems in a collective manner. It is true that it is the responsibility of security agencies to deal with these threats but the complexities of security in the 21st century was such that you need collective efforts in dealing with these issues.

“I emphasised to the council on the needs for the states to collaborate with and support the federal government in dealing with each individual threat. These threats differ from one zone to another. I briefed on behalf of the security agencies – both operational and intelligence.  I gave a general overview of the security situation in the country, the current situation and the trends and also the challenges that we are confronted with.

“I emphasized to the council the need for the state to collaborate with and support the federal government in dealing with each individual threats—and these threats differ from one  zone to another—and find a way of linking with security agencies so that we can find a lasting solution.

“These things cannot be overcome within a short period. That is the hard truth.  What we have decided to do is to work on certain methods.  For example, the council decided that a committee would be set up with representation from each of the geo-political zone to be chaired the IGP so that we find ways of decentralizing police operations so that there will be greater access to information and handling this situation will be easier rather than a centralised and cumbersome approach,” he said.

The NSA also said the federal government was looking into other security challenges coming outside the shores of this country.

NEC Constitutes Committee on Police Decentralisation
Share
Subscribe to our newsletter
Sign up here to get the latest news, updates and special offers delivered directly to your inbox.
You can unsubscribe at any time

2019: Osibogun and the future of Ijebu Central constituency