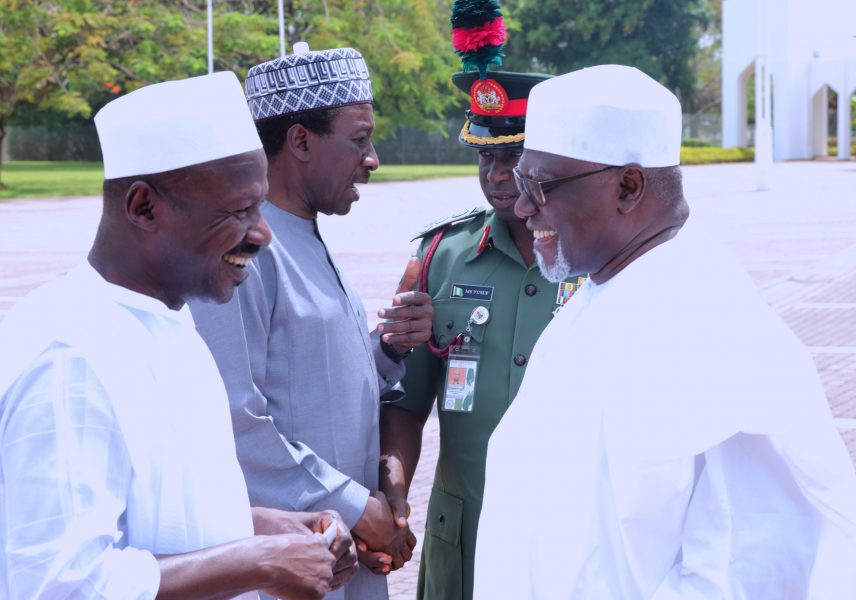 [dropcap]A[/dropcap]cting President Prof Yemi Osinbajo on Tuesday threw the social media world into a frenzy with a statement sacking the Director-General of the Department of State Security (DSS), Lawal Daura.

President Muhammadu Buhari was so angry about the DSS raid on the National Assembly, that he ordered the sack of the DG.

VP Osinbajo, fired Daura after a meeting with him and the Inspector-General of Police, Ibrahim Idris, at the Presidential Villa in Abuja.

The two security chiefs, who arrived Aso Rock at different times, were to update the acting president on security developments including the blockade of the National Assembly by security officials.

Per Second News gathered that he was thereafter arrested by a combined team of the Police and the Special Anti-Robbery Squad (SARS).

The sacked Lawal Daura, and the National Security Adviser, Babagana Monguno, has been locked in bitter battle for supremacy for the past two years, with Daura accused of undermining the NSA.

The cold war between two of the nation’s most senior security officers has festered to an extent that it had monumental  implications on national security, Per Second News gathered.

“The NSA has often complained that the DG of the DSS is over-reaching himself and performing his duties.

Meanwhile, respondents on social media sites expressed shock at the invasion of the National Assembly by masked agents of the DSS on Tuesday morning and the sack of Lawal Daura.

Olawoye Wole Femi, wrote on FB, “ I knew for certain, that there must be an end to this political somnambulism from those who should what is right,one day somehow , unless we are condemn to the notion that there is a demon at the seat of power that clogs right thinking. I hope that maybe APC can still be saved from within. In closing , let’s not all be deceived that this is the end of this matter, far from it the ripples effect will splash acidic contents in many directions. The line is now drawn.’

Ebelo Goodluck wrote, ” So , the presidency had empowered this renegade to have abused office serially?

Tony Onyima, ” The man should be charged for treason because what he authorized is nothing but a coup d’etat. Next is the IGP

Chi Obichie ”  Look here there is a conspiracy going on. Daura is a kindred of Buhari. Watch and see if he doesn’t come back in another guise. Osinbanjo sack Buhari’s man; that is a big joke. Please look beyond what you hear or read in the news. Something is being planned behind the scene. Sack ko sack ni.

arrest of DG DSSSocial media on fire over sack