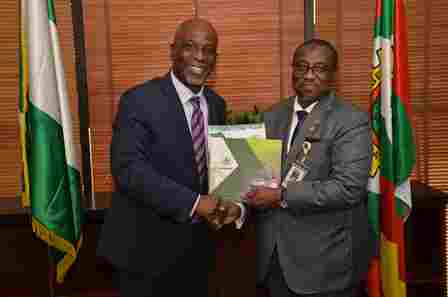 The Corporation in a terse statement issued by its Group General Manager, Group Public Affairs Division, Ndu Ughamadu, described the report as the handiwork of mischief makers seeking to drag the NNPC and its GMD into a purely political affair totally different from its mandate as the national oil company with fiduciary responsibilities to the government and people of the Federal Republic of Nigeria.

The NNPC emphasized that the report is not only false but also an affront on the verifiable reforms in the operations of the corporation under the remit of Dr. Baru which has witnessed irreversible strides in the area of transparency leading to the sustained publication of NNPC monthly operations and financial records.

The statement added that it is mere fiction and outright ‘’tales by moonlight’’ for anybody to insinuate that Dr. Baru or anybody else could just take a dip into the Corporation’s till and dole out the volume of funds being portrayed in that phantom report for political purpose.

The Corporation called on all well-meaning members of the public and oil and gas industry stakeholders to discountenance the said story noting that the Management of the NNPC remains committed to its statutory role and responsibility to the entire federation.

Sep 24, 2022
NNPC denies funding alleged Impeachment Plot Against Saraki
Share
Subscribe to our newsletter
Sign up here to get the latest news, updates and special offers delivered directly to your inbox.
You can unsubscribe at any time

How FMBN will change housing mortgage by end of 2018