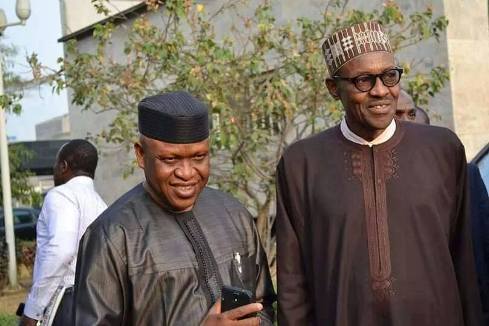 Emerhor, gave the assurance after a closed door meeting with the Chief of Staff to the President, Abba Kyari.

“We know that delivering the President in 2019 has become very easy in Delta State for multiple reasons, he said.

“The President has performed very well, he has been very good to the South-South, he has reactivated the amnesty programme, he has sorted out the Maritime University in the Ijaw-Ishekiri side of Delta is now functioning, and he has done a lot for us in Delta. He has empowered a lot of our people in Delta.

“We have the Minister of State Petroleum and the Minister of Transportation from South-South, the N-Power programme is working so all these have created the enabling environment for us to deliver the President in 2019.”

Emerhor, who said the president’s performance at the South South has exceeded that of former President Goodluck Jonathan, who was from the region, boosted that Buhari will be an easy sell to the people of the state.

The former APC gubernatorial candidate in the state told State House Correspondents, that the President has done a lot for the people of the State and the Niger-Delta region in general, thus their overwhelming support for his second term bid.

The APC stalwart, who expressed optimism that the APC can take over the reins of leadership in Delta State from the People’s Democratic Party (PDP), noted that the current Governor off the State has not done enough thus, clearing the coast for the APC to take over.

“Let me tell you, we are so fortunate that the Governor of Delta Sate, who is a PDP man, is not doing anything. Delta has a lot of resources and the expectation is that the State should be doing better than Edo State for example, which is our neighbour but the APC Governor in Edo is doing so well; even Willie Obiano in Anambra that doesn’t having anything is doing so well. So it’s so obvious that the finances of Delta State are not being applied and everyone in Delta is now convinced that APC must takeover because they produce performing Governors,” he stated.

Commenting on alleged divisions in the APC in Delta State after the party congresses, he said the issue was not peculiar to Delta State.

“The issue of congresses and division did not happen only in Delta. It happened across the country but this is the period of reconciliation. There is a group that did not work with the majority of the people in Delta; we formed a unity group in Delta that had so many Governorship aspirants and leaders working together. But as you know, the Ogboru and Omo-Agege group put their own governorship aspiration ahead and decided to work separately but the move we are making is to bring everybody together, provide a level playing field so that all the Governorship aspirants will work together because they will have a fair ground and one of them will emerge. But the great objective we have is how to deliver the President in Delta State 2019. That is our priority and the ground is ripe for us to take over that State and deliver two million votes for President Buhari in 2019,” he said.

Asked what are Buhari’s chances in the south south beyond Delta State, Emerhor who was accompanied to the Aso Rock Villa by former media aide to President Jonathan, Ima Niboro said, “in 2015, we had President Jonathan who is from the south south, that created an emotional issue but w have seen now that even when Jonathan was in power, he did not do for Delta what President Buhari has done for us. The Ogoni cleaning exercise that is going on there is one of the major thing we can count on. The east west road is being completely rehabilitated and that did not happen when one of our own son was the President. So, we are very very confident that the south south this time around wants to belong to the center and that is why we are going to be able to deliver the President there.”