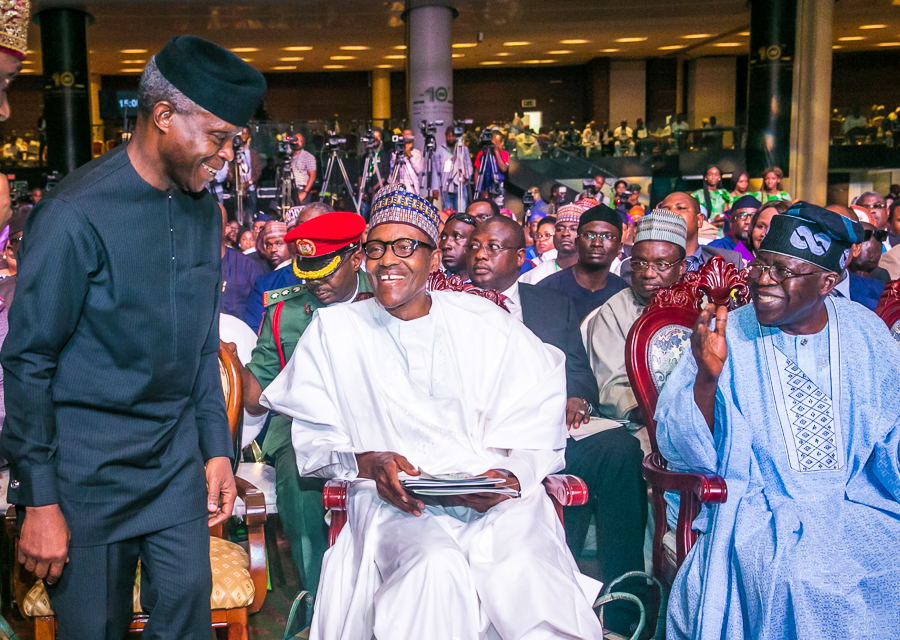 Share
The Vice President, Yemi Osinbajo,  on Thursday said that no matter the antics of the Peoples’ Democratic Party (PDP), the APC government will continue to talk about the corruption perpetrated under the President Goodluck Jonathan’s administration.
He said the Muhammadu Buhari’s administration was determined to change the narrative of Nigeria, known as a country where corruption is perpetrated with impunity.
“Let me say that when we began our journey in 2014, our party the APC was determined to change the dominant narrative about our country, he said  at the 10th Bola Tinubu Colloquium in Lagos, to mark the 66th birthday of the former governor of Lagos State.
Don't Miss

Mar 1, 2022
“We saw a nation where a few in office had so privatize the commonwealth that when oil prices where at their highest and we were getting growth figures as high as 70 percent, majority of the people remain extremely poor.
“In one of our campaign trips in Zamfara state, Mr. President said, “look at the eyes of these people,” of course he saw the poverty and desperation in their eyes, he said, “they expect us to fix their poverty as soon as we get into office.”

“To address the question of the welfare of the people, we realize that if we waited for the economy to pick up and then  provide Jobs for the people, especially young people, many would have given up hope, many people would have ended up in all manner of illegal activities”.

He said the same $3 billion that developed wings under the last administration would be used to fix six major federal roads and the second Niger Bridge.
According to Osinbajo, “I will give one more example, $3 billion was lost to something called, the Strategic Atlantic Alliance Contract in NNPC. The people simply took the oil and never paid back. The same $3 billion which is in trillion of naria, the minister of finance sat with us at the Economic Management Meeting, and we were proposing the following roads for the same $3 billion Abuja-Kaduna-Kano Road, 2nd Niger Bridge, Enugu-Port Harcourt road, East West Road, Shagamu-Ore-Benin road, Kano-Maiduguri Road, Abuja-Lafia-Akwanga-Keffi Road, Lagos-Abeokuta Road, all for the same $3 billion. That is why the criminal looting of this country cannot be allowed to continue.
“Today, we earn 50 percent less than five years ago and we are investing several times  more. In 2017, we spent N1.3 trillion on capital, the largest in the history of this country.
“
Osinbajo
Share
Subscribe to our newsletter
Sign up here to get the latest news, updates and special offers delivered directly to your inbox.
You can unsubscribe at any time