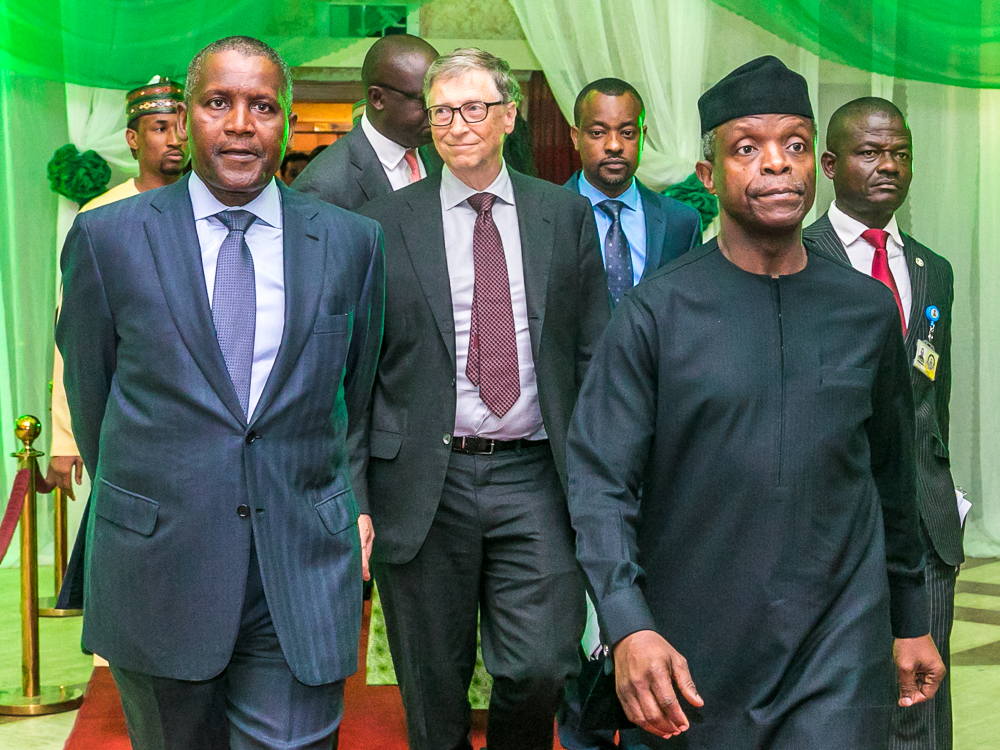 Share
Co-Chair of the Bill and Melinda Gates Foundation, Bill Gates is speaking out against the Buhari administration’s Economic Recovery and Growth Plan ( ERGP), saying it does not reflects people’s needs.

Gates, who is the world’s richest man said he does not enjoy “speaking bluntly” to Nigeria when the people had been “so gracious enough “to invite him, however hinted that Statistical data show the country “still looks like a low- income country”

He said he was encouraged to be blunt by Aliko Dangote’s frank approach to “stressing the importance of accurate data.”

Gates stated this at the expended National Economic Council on Investment in Human Capital, presided over by Vice President Yemi Osinbajo, at the State House Conference Center, Presidential Villa, Abuja, on Thursday.

Taking a comparative analysis of data to back his arguments, he described Nigeria as “one of the most dangerous places in the world to give birth” , with “one in three Nigerian children, chronically malnourished”

The Bill and Melinda Gates Foundation has committed well over $1.6 billion with the foundation’s biggest office in Africa located in Nigeria.

The foundation which is committed to making lives better for poor people globally, is also planning to increase its Commitments to Nigeria, Gates said.

Nigeria, he said has the fourth worst maternal mortality rate in the world, only ahead of Sierra Leone, Central African Republic and Chad.

Gates however sees the country thriving if it is ready to invest in the health, education and opportunities- the human capital “if you don’t, however, then it is very important to recognize that there will be a sharp limit on how much the country can grow.”

Gates who sees Nigeria as having “unmatched economic potential” assured that his Foundation is eager to support the government to make “Nigeria a powerhouse that provides opportunities for all its citizens.”

Citing the gains Nigeria has recorded in the immunization against Polio, he urged Nigeria to pursue human capital development with the same vigor to achieve the desired results.

The Chairman, Dangote Foundation, Aliko Dangote, in his opening remarks, said for Nigeria to truly compete globally, we must prioritize investments in the health, education and opportunity of our people alongside other critical areas like infrastructure. Together, these are the inputs that will make Nigeria richer.

At a function in Washington, last year, the International Monetary Fund announced that the federal government’s Economic Recovery and Growth Plan may not achieve its objectives unless the government changes its approach.  If the government’s presentation at the IMF annual meeting last year is anything to go by, then we can assume nothing has been learnt, said a top IMF official.

The issue remains that the Nigerian government continues to plan on uncertainty, the same manner it continues to budget against the price of crude oil, its natural resource – the main factor responsible for its economy being in the doldrums. Nothing in history suggests that recovering illicit funds is an easy task. Monies looted by the former head of state, General Sani Abacha decades ago are yet to be fully returned and the subject of several legal procedures across various jurisdictions,according to the Post.

Economists in their dozens have criticized the Focus Labs launched by the vice president last week, saying its a waste of time and resources.

Osinbajo, in his response to Bill Gates said that high oil prices and economic growth of previous years had failed to translate into a better life for most Nigerians.

Per Second News gathered that unnecessary delays in policy action — including pre-election pressures  has affected economic recovery plans, making it costlier and more difficult to achieve.
ERGPGatesNigeria
Share
Subscribe to our newsletter
Sign up here to get the latest news, updates and special offers delivered directly to your inbox.
You can unsubscribe at any time