Buhari rejects ethnic bias allegations, says I got a paltry 198,000 votes from SE, yet they have 4 ministers 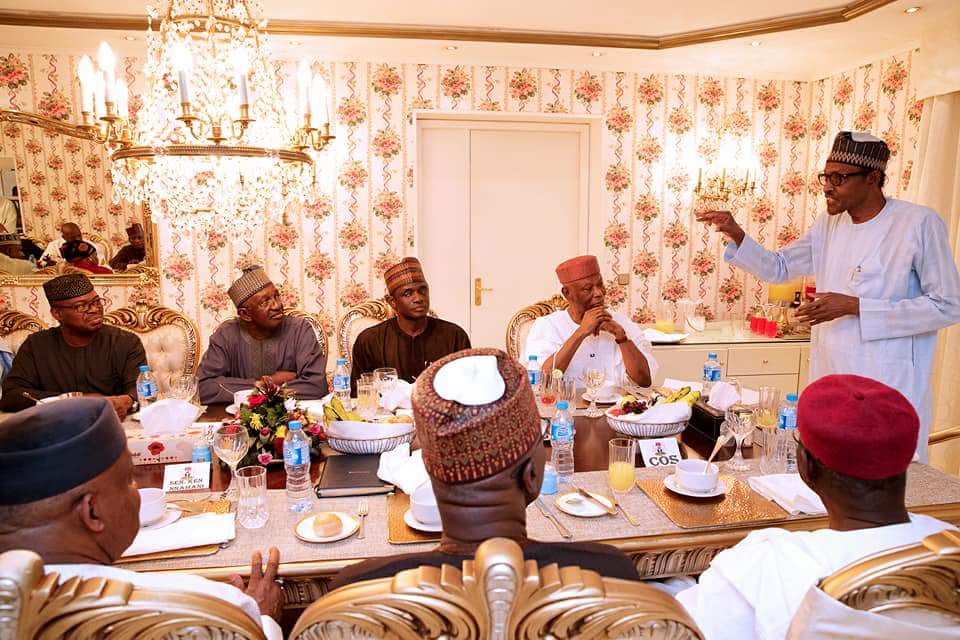 [dropcap]P[/dropcap]resident Muhammadu Buhari has forcefully rejected accusations that he has ethnic bias views.

“Seven states of the North are only represented in my cabinet by junior ministers, ministers of state, he said Thursday night during a dinner with leaders of the All Progressives Congress (APC) in Abuja.

“In South East, I got 198,000 votes but I have four substantive ministers and seven junior ministers from there.

President Buhari revealed that during the days he struggled to become the President, he enjoyed the support of people of other ethnic groups and religious affiliations.

“There is one thing that disabused my mind in a dispassionate way about ethnicity and religion across the country. You know that tribunal for presidential election started at High Court of Appeal. The President was my classmate. I missed only four of the court sittings.

“For that first phase, 2003, we were in court for 30 months. My legal leader was Chief Ahamba (SAN), an Igbo man. He asked the panel of judges to direct INEC to produce the voters register to prove that the election was done underground.

“When they came to write the judgment, they completely ommitted that. Another Igbo man, a Roman Catholic, in the panel of judges wrote a minority report.

“I went to the Supreme Court. Who was the Chief Justice? An Hausa Fulani, a Muslim from Zaria. After 27 months, Ahamba presented our case for two hours and 45 minutes. The Chief Justice got up and said they were going on break and when they returned the following day, they will deliver the judgment. They went away for three months. That was what made it 30 months.

“And when they came back, they discussed my case within 45 minutes.

This is even as he has explained why  he does not make decisions in a hurry despite criticisms that has trailed his actions or inactions on some burning national issues.

Speaking at the dinner, President Buhari said he is fully aware of the issues confronting the country and that he is guided by historical antecedents.

He said he decided to host the party chiefs in order to assure them that he was aware of the country’s problems and he would always reflect on the incidents that preceded his assumption of office.

“I felt I had to invite you to let us eat together and I tell you that I am sitting here very much aware of the problem in this country. I will always reflect on historical antecedents.

“I keep telling people that while I was in uniform, quite reckless and young, I got all the ministers and governors, and put them in Kirikiri. I said they were guilty until they could prove their innocence. I was also detained too.

“Virrtually to do anything. I will sit and reflect and continue with my clear conscience.”

Elaborating more that contrary to claims he that he is not favouring the North as being speculated in some quarters, the President said, “There is something that hit me very hard and I am happy I hit it back at somebody.

He said having been in the saddle for six years, Jonathan had the capacity to cause trouble if he wanted to do so.

“The PVCs worked well in 2015. That was why when the former President rang me, I went temporarily into a comma.

“I will never forget the time. It was quarter after 5pm and he said he called to congratulate me and that he has conceded defeat. He asked if I heard him and I said yes and I thanked him for his statesmanship.

“The truth is after being a deputy governor, a governor, Vice-president and President for six years, and he took that decision is great.

“He could have caused some problems. He had stayed long enough to cause problems,” he added.