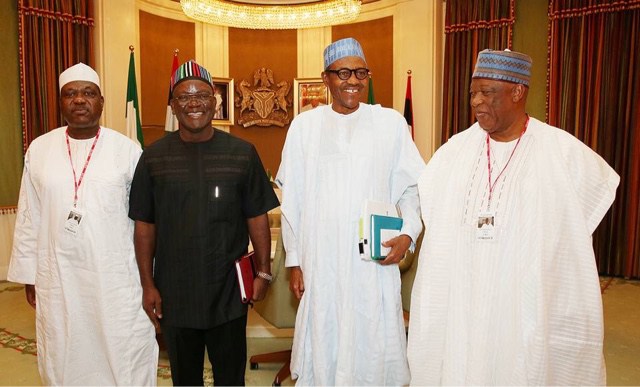 President Muhammadu Buhari has appealed to a delegation of political leaders, traditional rulers and elders of Benue state led by Governor Samuel Ortom, to a parley to exercise restraint following the recent attacks on some communities.

“I ask you in the name of God to accommodate your country men. You can also be assured that I am just as worried, and concerned with the situation,” he said.

“Your Excellency, the governor, and all the leaders here, I am appealing to you to try to restrain your people. I assure you that the Police, the Department of State Security and other security agencies had been directed to ensure that all those behind the mayhem get punished.

The President assured that the Police, the Department of State Security and other security agencies had been directed to ensure that all those behind the mayhem get punished.

The President told the delegation that his administration had already begun a process of finding lasting solution to the perennial challenge of herdsmen conflict with farmers and communities around the country.

The President while commiserating  with all the victims of the attacks, and the families who lost loved ones and properties, noted that the government would make efforts to ameliorate the situation of all the victims.

Buhari said relevant agencies had been directed to start catering for the humanitarian needs.

The Tor-Tiv, Prof. James Ortese Iorzua Ayatse, said his entire domain had been thrown into mourning due to the incessant attacks.

“We want you to put an end to the gruesome situation,’’ he added.

President Buhari said the Inspector General of Police had been directed to relocate to the state to provide security for lives and properties, urging all Benue indigenes to trust the security agencies and report all suspicious cases of movements in the state.

Ortom who said, the Minister of Agriculture and Rural Development, Chief Audu Ogbeh, who is a Benue son, took the pains to explain the need for colonies that would solve the continued herdsmen/farmers conflict in parts of the country, insisted that ranching was the way to go.

At the end of the meeting which lasted one hour, Ortom, told State House Correspondents that even though he now understands the difference between colony and ranching, Benue State does not have 10,000 hectares the federal government has requested to establish colonies for cattle rearing.

On if specific proposals to address the problems were raised at the meeting called by President Buhari, Ortom said,  “Let me correct an impression, this meeting was at the instance of Benue stakeholders and not Mr. President calling us to a meeting. As the father of the land, we felt that let us interface with him, not just coming from the governor but from the stakeholders. And also to send the message that I am not just not on my own when people try to accuse me for promulgating a law which they don’t believe in. This is a law that originated from the people and all the stakeholders as you see them, we are solidly behind this law. Because for us we feel that that is the best way to end this farmers, herdsmen clashes.

The governor said they also appealed to Buhari to cause the arrest of Maiyetti Allah leaders who, he said, were still issuing threats of attacks.

Ortom said, “You are aware of the challenge we had since the 1st of January up to this moment. Several people were killed, more than 60,000 people displaced we are still counting.

“There are still security issues from one town to the other like some few  days ago we had an uproar in Makurdi local government, headquarters of Benue State where some hoodlums wanted to take advantage. That is one of the things we have discovered in trying to create confusion so that they can go in there and loot.

“We have made it known that for us in Benue State is that there is no room for anyone taking laws into his hands. It is expected even when you are offended or someone violates the law, the best thing to do is to report, by that we will be able to met our sanctions on such people. Butt when you take laws into your hand  you are inviting anarchy and we will not accept this.

“But beyond that we made strong appeal to Mr. President to arrest those people that perpetrated this act, the Miyetti Allah Kautal Hore,  because they are not above the law, they made inciting statements against our people and they came and perpetrated this act. And until this time I speak to you, they are still issuing out threats and it is not just anti-grazing law, it is occupation because the manner with which they come and invade the man and take over the land it is something.. I am not sure willing to join issues with anyone. We are law abiding citizens, we are not going to let our people go out of control.

“When people violate the law and they are not sanctioned it becomes a problem. People should be investigated and I believe that these people will be arrested because there is enough evidence against them.”

“Like I told you the last time I came here, I did not understand what colonies meant. Today, I was privileged to meet him and he did explain to me that a colony is many ranches our in one place, restricted in one place. So for us in Benue State there is no 10,000 hectares, they are looking for 5,000 hectares we have no 10,000 hectares to allow it for that kind of a thing to take place. So people are free. Other states have the land but we in Benue State we don’t have and that was what led to us enacting this law.”

BenueBuhariColonyLand
Share
Subscribe to our newsletter
Sign up here to get the latest news, updates and special offers delivered directly to your inbox.
You can unsubscribe at any time