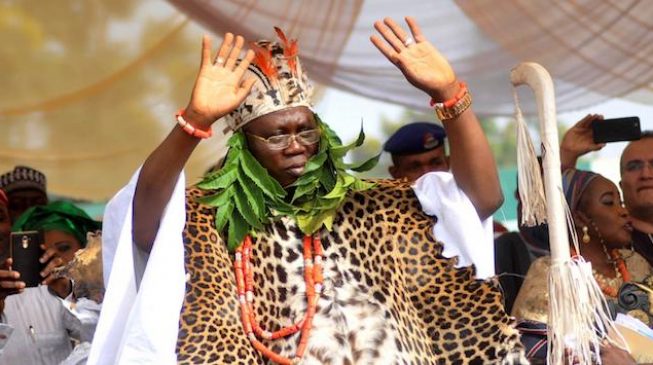 Share
The Alaafin of Oyo, Oba Lamidi Olayiwola Adeyemi III, has  opened up on the decision to bestow on Dr. Gani Adams the title of Aare Ona Kakanfo.

“It is the consignment of a man with a Lion’s heart and an eagle spirit, which we have found in Aare Gani Adams, revealed the monarch during a thanksgiving service on Sunday at St Mary’s Catholic Church, Oyo to mark his 47th year on the throne

He said it was because of Adam’s passionate commitment to the protection of the culture and territorial integrity of Yorubaland.

He disclosed that out of 25 candidates shortlisted for the title, Adams was found to have paid dearly and earnestly for the interest of Yorubaland “The benchmark of selection was not hung at the sentinel of political engagement, solidity in terms of gold, wealth or fortune, neither was it on the number of properties acquired on global pedestal, but on agrarian and blind engagement of those who have abused and abusing, those who have infringed and infringing on the territorial and cultural territory of Yoruba.

“Whatever methods employed by him and his association, the fact still remains that there was a counter balance check valve which sent jitters down to the spines of the irrational irredentists who hitherto thought that they can make mincemeat of Yoruba land.

“And for his bold steps at ensuring that Yorubaland was not desecrated or lorded over both by blue collar miscreants, ethnic irredentists and he paid dearly for it.”

Adams, Oba Adeyemi pointed out, “has been poignantly consistent in fighting for the protection of Yoruba. He was for many times humiliated, disgraced, manacled and jailed. It is natural for you either to hate, love and dislike him. However, the truth must not only be told that he was there when the Yoruba needed a person who is bold, strong and ready to lay his life for the defence of the heritage.

“After he came first at the examination and scrutinization by men and earthly beings, his appointment as the 15th Are Ona Kakanfo was also subjected for approval and subsequently sanctioned by the gods and all the elemental forces in the firmament.

“We also ensured that the three religions being fervently practiced by the Yoruba prayed and endorsed his appointment. Thus, we find it expedient to be here today not only to give and pray to God through Mother Mary, the Holy Virgin for my 47th year on the throne, but also for the successful installation ceremony of the 15th Aare Ona Kakanfo of Yorubaland.

“The role of an Aare Ona Kakanfo both in the peace and war period is not a deal for the Lilly or jelly livered or for a spineless fellow.