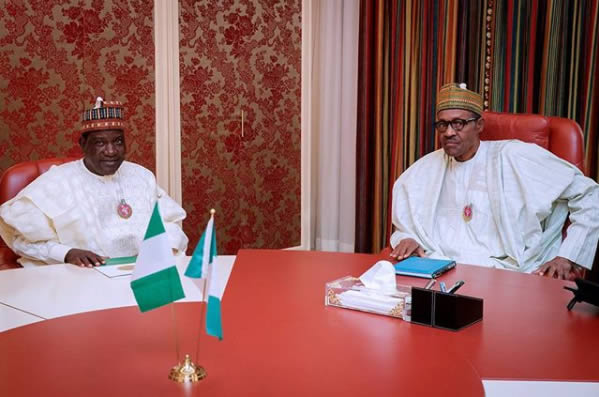 Plateau State Governor Simon Lalong is convinced that one of the cardinal factors that led to the herdsmen massacre in Benue state was that his counterpart, Samuel Ortom did not listen to wise counsel before implementing the anti-grazing law.

” I told the governor of Benue about the law, I said look, why don’t you tread softly, just be careful, take other steps before you start implementation, Lalolng said at the Presidential Villa on Thursday after meeting with President Muhammadu  Buhari.

“So I said do consultations allow the people to understand and buy into the concepts.”

“Secondly, I can’t implement anti-grazing law. There are levels of implementation which will require government intervention, provision of ranchers.

“Ranching as a concept is a policy and there are states realizing the importance of the policy. I cannot wake up like some people said last year that I should go and do anti-grazing Law. And I asked anti-grazing law for what? We are talking about ranching, we are talking about development of livestock business and I cannot use the word anti to start driving people who are interested. It is for those who are interested to come and get involve in it.

According to Lalong, it is not only Fulani that engage in cattle rearing as agriculture is now an aspect of diversification of the economy of the current administration.

Asked the one he was going to settle for between ranching and colony, he said, “For me, anytime I hear anything about agriculture I don’t jump into conclusions, I go and study it. Yesterday (Wednesday) I was at the federal ministry with my agricultural team, commissioner and others, we spent almost five hours because I said they must convince me and explain to me what colony is. So that when I go back just like I did with ranching I will go and tell my people that this is the concept. When I had the briefing with them I was convinced about colony.

“They said the difference between colony and ranching is that one is bigger than the other. You get a very big field, you get investors, you demarcate the area. Somebody will ranch bees, somebody will ranch goats, somebody will ranch cattle but government will develop the place, put grasses, water and anybody who is coming in must pay. And you cannot go and force any land, is voluntary land that government has. For me in Plateau we have two large areas already, that is the concept and my eyes are already going back.

“So, they are saying they are going to visit the place as part of the solution to farmers/herdsmen clashes in my state.

“When Plateau wanted anti-grazing law and I asked against who? And they said against a particular tribe. And I said tell me who in Plateau is not into open grazing. Seventeen local government we are all into open grazing. Is either you are grazing cattle, goat, sheep, or even chicken because the law will protect and restrict the movement of the all these animals, there are general livestock. If you are talking of this thing, we will take a holistic approach in preparing for implementation. And when you do that with a lot of consultation like we have done in Plateau… when I got back I heard the Fulanis are moving from state to state sensitizing  their people on the need to embrace ranching.”

“We must help the federal government to find ways of addressing issues because agriculture is not just agriculture now, it is now a means of diversification. And if you have to diversify it is serious business for everyone is not for a tribe.

So I said if we have to encourage people to go into ranching I will not use the word anti.”

Anti-grazing lawBenueLalongOrtomPlateau
Share
Subscribe to our newsletter
Sign up here to get the latest news, updates and special offers delivered directly to your inbox.
You can unsubscribe at any time