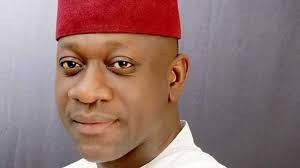 The controversial House of Representatives whistleblower, Hon. Abdulmumin Jibrin, who has been on suspension for the past 16 months over budget padding scandal, emerged from a private visit to President Muhammadu Buhari Thursday saying it’s been a learning curve.

“For every situation like this there is always an opportunity to learn, is a learning curve so is fine, he said while speaking to journalists after meeting privately with President Muhammadu Buhari at the Villa.

Jibrin was suspended in September 2016 for 180 legislative days but he has spent over 400 days in suspension.

“Is only normal. Of course Nigerians like justice, my constituency has been suspended for 16 months, so is only normal that people will talk and ask questions, why are we not back on the aspect of court case that has been lingering for the past 16 months. I think these are some of the reasons people are raising issues in the public glare, Jibrin said.

He also said he was not in the villa to seek the president’s intervention over his suspension nor did they discuss the crisis rocking the All Progressive Congress (APC) in Kano State.

Jibrin on why he was in the Villa said, “As you are aware I have not seen the President for a while now. Is a meeting between a son and a father.”

On if he sought the President’s intervention on his political crisis in the House of Representatives, he replied, “Well, I cannot comment on that. The most important thing is that I saw him and he is a very high spirit. I greeted like a son and he spoke to me like a father.”

On how he felt since his  counterpart Senator Ali Ndume was recently recalled, Jibrin said, “Well, that is the interesting thing about the situation. The same case, similar case, identical case was dispense with within two months but I’m is still hanging in the court system but again I know the Nigerian judiciary is just so I’m pretty sure that soonest I will be able to get judgement and my constituency will soon get back to the house.”

Speaker House of Representatives, Yakubu Dogara had announced the removal of Jibrin in a speech he read in plenary on July 20, 2016 alleging budget fraud and serial betrayal of trust.

To back his allegations against Dogara, Jibrin had released to the media.

On July 30, the State Security Service sealed off secretariat of the Appropriation Committee in the National Assembly after Jibrin raised the alarm that Dogara had allegedly concluded plans to cart away computers and destroy evidence.

Jibrin also visited law enforcement agencies, including the EFCC, the SSS and the police, where he said he personally submitted petitions detailing evidence of fraudulent manipulation of budget by Mr. Dogara, his deputy Yusuf Lasun, House Whip, Alhassan Doguwa, Minority Leader, Leo Ogor, and nine others.

Spokesperson of the House, Hon. Abdulrazaq Namdas had reportedly insisted that Jibrin was yet to complete his suspension and that Jibrin would have to apologise to the lower chamber as a condition for his return to the chambe

Fibrin
Share
Subscribe to our newsletter
Sign up here to get the latest news, updates and special offers delivered directly to your inbox.
You can unsubscribe at any time

Just in: Some forces in Aso Rock trying to scuttle Tinubu’s presidential…