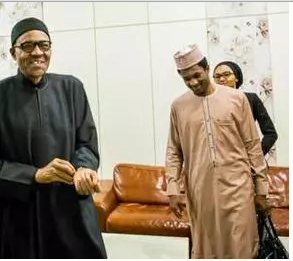 The Senior Special Assistant to the President on Media and Publicity, Garba Shehu, said Thursday that the administration denies report that Yusuf Buhari, the son of President Muhammadu Buhari, who had a bike accident Tuesday night, has been flown out of the country for further medical treatment.

“That is not true please, he said.

Several news outlets said the first son was flown out in an air ambulance, secured by the family, under the care of a Nigerian doctor and three paramedics.

“An orthopaedic consultant with specialisation in head injuries was also said to be on the flight to monitor his progress, the reports alleged.

A family source who preferred anonymity had said, “Yusuf was trying to overtake his friend when he suddenly veered off the road and skidded. He lay there unconscious for a while before the first lady was alerted.

President Buhari was abroad for many months on medical vacation to treat an unknown ailment.

Nigeria’s political elite have historically shunned local hospitals and instead sought treatment abroad.  Famously, in September 2015, Godswill Akpabio, then governor of oil-rich Akwa Ibom state,  flew to London for treatment after a car crash just four months after he commissioned a $95 million hospital in his state.

President Buhari immediately after he came to power announced his government  would no longer pay for medical trips of public officials. But his foreign medical trips, despite a well-funded presidential clinic, suggests even Buhari doesn’t trust local hospitals with his health despite expecting tens of millions of Nigerians to do so.

Buhari's SON
Share
Subscribe to our newsletter
Sign up here to get the latest news, updates and special offers delivered directly to your inbox.
You can unsubscribe at any time

May 18, 2022
Prev Next 1 of 2,048
Subscribe to our newsletter
Sign up here to get the latest news, updates and special offers delivered directly to your inbox.
You can unsubscribe at any time
More Stories
Trending Story