UNHEARD OF HORROR: Slaughtered Because They Spoke English 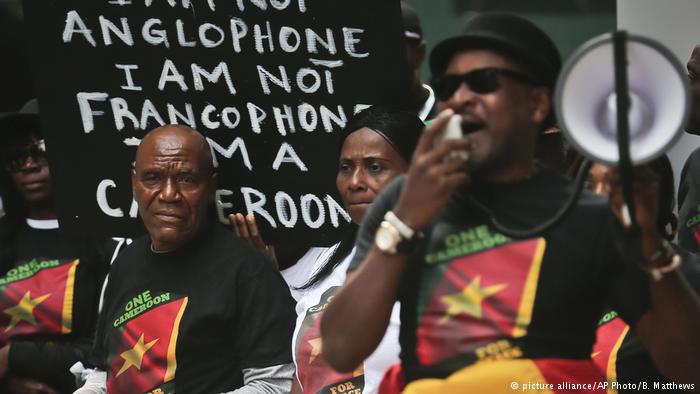 CALABAR, Nigeria—At the beginning of last month, in the largely Francophone country of Cameroon, a separatist movement decided to make a bid for independence. English-speaking Cameroonians in two western regions of the country close to English-speaking Nigeria took to the streets to proclaim the Republic of Ambazonia.

Unlike Kurdish separatists in Iraq or Catalan separatists in Spain, they attracted little attention from the outside world, but they were met with extraordinary violence. Cameroonian troops and attack helicopters opened fire on the protesters. These were not rubber bullets. These were live rounds, and many lost their lives.

Amnesty International immediately reported that 17 people were confirmed killed during the protests, but some other reports suggested as many as 100 lost their lives. The killings happened in multiple towns in the two English-speaking regions of Cameroon and they appear to have continued, driving tens of thousands of refugees across the border into Nigeria.

According to a Reuters report, soldiers first fired tear gas on protesters in the Southwest Region town of Tombel before opening fire on them. In Buea, capital of the region, police on the ground and a helicopter opened fire on protesters who had run into the bush to bypass a military checkpoint. In Kumba, also in the Southwest, soldiers “broke into homes and carried boys away,” a resident said. One woman said her son was killed outside his home in Kumba despite not being involved in the protests.

In Akwaya, another Southwest town, Cameroonian forces allegedly moved from one home to another, rounding up young men and women. In one particular incident, as narrated by a former parliamentarian, soldiers stormed a house inside the popular Bamenda Quarters and asked the woman they met there about her husband. When she had no answers for them, they threw her outside the building and shattered her legs with bullets. They then found a young man next door and shot him dead.

“The soldiers were moving house to house, killing every youth they saw.”

Around Akwaya, many houses were looted. Others were set on fire. An orphanage for girls was completely wrecked by soldiers. Many people ran for their lives.

“I took off as soon as I saw the soldiers,” one man told The Daily Beast in the southern Nigeria town of Utanga in Cross River State, where many who fled the crisis are taking refuge. “The soldiers were moving house to house, killing every youth they saw.”

As night fell in Akwaya, 27-year-old Josiah tried to take chairs from outside back into the house when soldiers struck. They burned down his house and shot at his younger brother. Josiah ran into the bush, where he spent four days before he was able to cross to Utanga in Nigeria.

“I was walking barefooted and kept hearing gunshots while I was moving,” he told The Daily Beast. “I think they were shooting at other people.”

While the unrest has gathered little international concern, leading voices in the troubled region are insisting that Anglophone Cameroonians continue to be killed. Bishops under the Bamenda ecclesiastical province, which covers English-speaking areas of Cameroon, saidthere is an indication of “bloodbath and genocide that has skillfully been initiated in the Northwest and Southwest Regions,” while a former head of the Cameroon Bar Association said evidence “shows clearly that there is genocide that is being committed” in the two regions.

Those allegations are hard to square with the known casualty counts so far, but they reflect, at a minimum, the growing sense of horror provoked by the violence, which has driven tens of thousands of people out of their homes and into Nigeria.

The Cameroon government denies its forces have targeted civilians in Anglophone regions, and has rather condemned what it called “unfounded allegations” of genocide which it said was propagated by “secessionists and their relays to carry out their evil intentions to destabilize Cameroon.”

Cameroon is generally a troubled nation. In the Far North region of the country, which is Francophone, Boko Haram militants have been on a rampage. Attacks by the jihadist group have killed close to 200 people since April—four times more than in the preceding five months, according to Amnesty International.

In the most recent terrorists attack that was carried out on Oct. 31, a little girl about 10 years old slaughtered at least five of her schoolmates in the town of Zamga using bombs strapped around her waist. According to one reporter they were tied with a bandana that had the design of an American flag. Her friends were playing when she ran straight in among them and detonated the explosives. It was the first reported Boko Haram suicide attack targeted at children in the central African nation.

That atrocity was particularly disturbing, but suicide bombings in the Far North, a finger of Cameroon between Nigeria and Chad, no longer come as a surprise. Boko Haram militants have been active there for many years.

But stories of torture, seizures, and the brutal killing of civilians by Cameroonian soldiers deployed to Anglophone regions have stunned many in the country.

“Mass burial graves have been discovered in various locations,” Samuel Tita Wara, a reputable professor and member of Southern Cameroonian United Front (SCACUF) that is calling for independence from Cameroon, told The Guardian, a Nigerian newspaper. “As they [the soldiers] kill, they take away the corpses so that there are no concrete evidence.”

“We are no longer slaves of Cameroon. Today we affirm the autonomy of our heritage and our territory.”
— Sisiku Ayuk, leader of SCACUF

The crisis in the English-speaking regions began just a year ago, in November 2016, when lawyers in Bamenda took to the streets to protest against the government’s decision to appoint, in Anglophone courts, magistrates who were neither trained in British common law nor spoke fluent English. Teachers in the Northwest and Southwest regions, unhappy with the government for hiring French speakers in Anglophone schools who couldn’t communicate well enough in English, also called sit-in protests.

The government responded to the protests in a ruthless manner. Last November, more than 100 people were arrested by security forces during days of protest. In December, four people were killed when police opened fire during a protest, even though most of the shots were into the air. The government then declared the activities of two major organizations illegal, arrested a judge at the Supreme Court on charges of funding the Anglophone campaign, and cut off internet access in the English-speaking region. Then came the killings that began on Oct. 1.

Anglophones make up about 20 percent of Cameroon’s population. The United Nations organized a referendum in February 1961 in which Anglophone Cameroonians, then under British rule, voted to rejoin Francophone Cameroon. Both merged on Oct. 1, 1961, and inherited a constitution which recognized the country as a federation of two states with “the same status.”

But not long after the reunification, things began to change. Then-President Ahmadou Ahidjo, a Francophone, replaced the two federal states with six regions. He appointed federal inspectors of each region and gave them more power than locally elected politicians. Ahidjo followed up by discarding the currency used by the Anglophones. He refused to recognize Cameroon’s membership of the Commonwealth, and he abolished federalism altogether through a national referendum.

President Paul Biya, also a Francophone, succeeded Ahidjo in November 1982 and began to introduce policies similar to that of his predecessor. In 1983, he split the Anglophone region into the Northwest and Southwest provinces. A year later he changed the country’s official name to the Republic of Cameroon, as it was known as when it was a Francophone territory, and removed the second star from the flag that had stood as a representation of the Anglophone region.

Politicians, activists, and advocates from the Northwest and Southwest from time to time spoke against the policies of the government as they affect English-speaking areas, but when the Biya administration—which is still in power—decided to appoint Francophone magistrates in Anglophone courts, the people thought they had had enough.

“We are no longer slaves of Cameroon,” Sisiku Ayuk, leader of SCACUF, said as he declared Ambazonia an independent nation on Oct. 1. “Today we affirm the autonomy of our heritage and our territory.”

As the man who often describes himself as the “president” of Ambazonia was making those comments, thousands of people, who were scared of being killed or already had family members slaughtered or their homes destroyed by Cameroonian forces, began to move across the border into towns and villages in Nigeria’s southern Cross River State, creating a huge refugee situation in their host communities.

“Close to 20,000 refugees have crossed to Cross River,” John Inaku, head of the State Emergency Management Agency (SEMA), which is caring for the refugees, told The Daily Beast. “So many people are making it here on a daily basis.”

As the number of people crossing into Nigeria increases daily, with them come devastating stories of brutal killings.

A woman said she was in the kitchen cooking when soldiers stormed her compound in Akwaya and began to target the men. Some were killed. Others were seized from their families.

“The soldiers took my two sons away,” she told The Daily Beast. “I also haven’t been able to find my husband since then.”

The United Nations Refugee Agency expects 40,000 refugees to cross into Nigeria with 30,000 of them to come through Cross River. But the current situation is not what the state government is prepared for, and many of those who have fled Cameroon can’t find food or shelter.

“We are struggling to cope with the influx of people,” Inaku said. “We are in need of help.”

CameronEnglish
Share
Subscribe to our newsletter
Sign up here to get the latest news, updates and special offers delivered directly to your inbox.
You can unsubscribe at any time

Jill Scott Has Filed For Divorce, Her Estranged Husband Responds

Brazil’sPetrobras to Sell Stake in Nigeria JV to Reduce Debt