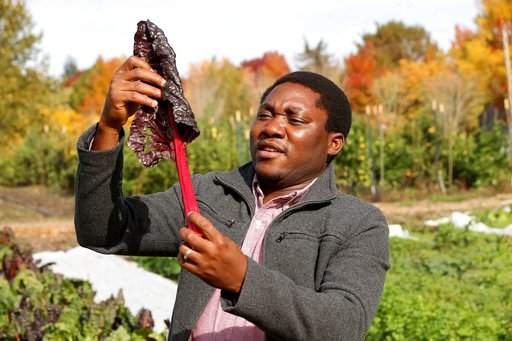 On Monday, Oct. 23, 2017, Cornelius Adewale won the Bullitt Foundation’s environmental prize for 2017 for his leadership role in developing an app and web tool that can measure a farm’s carbon footprint and help farmers reduce the impact of that footprint. Adewale came to WSU from Nigeria, where he ran an organic farm.

One sunny day last week, Cornelius Adewale bent down at the end of a row of Italian parsley growing on the University of Washington’s urban farm and gathered a handful of dirt.

He squeezed his fist tight, then opened his hand. The deep brown soil formed a ball in his palm — the kind of rich, healthy soil he hopes to help farmers nurture in his home country of Nigeria.

Six years ago, Adewale moved to Pullman with $6,000 in his pocket — money he’d earned from the vegetable harvest at his farm in southwest Nigeria. It was just enough to pay for the first semester of classes in organic agriculture at Washington State University.

Six years later, Adewale is a Ph.D. candidate at WSU and a member of the board of directors of Washington’s Tilth Alliance. In late October, he accepted the Seattle Bullitt Foundation’s annual environmental prize — a $100,000 award for graduate students pursuing leadership positions within the environmental field.

Adewale plans to use the money to build a phone app that will help Nigerian farmers grow more crops, using fewer resources, with a lighter touch on the planet. The app will be a portal to research and information about organic farming specific to Nigeria’s climate. And farmers will be able to measure the quantity of organic matter in their soil just by taking a picture of it, using their phones.

Adewale, 34, is an enthusiastic talker, whose ideas spill out in rapid succession. He has a broad, friendly smile, and talks with his hands, making big gestures as he speaks, and laughing often.

“Cornelius just had a magnetism and energy and charm that made him irresistible,” said Denis Hayes, president and CEO of the Bullitt Foundation. “He came with rave recommendations from his professors, who believe he can be a transformational force in agriculture.”

For the past two years, Adewale has been working with a team of students at WSU to create a web-based tool that helps Washington farmers measure their carbon footprint, and gives them ideas for how they can reduce that footprint by adjusting the way they farm.

“The thing that is really unique and wonderful about Cornelius is his humility — he really relates to everyone as individuals,” said Lynne Carpenter-Boggs, an associate professor in WSU’s department of crop and soil sciences. “He’s there to help, but in a way that’s about empowering the individuals, not telling people what to do . he truly is a natural leader.”

In Nigeria, Adewale said, 70 percent of the workforce is employed in agriculture. Yet the country also has a high unemployment rate, and many people go hungry — Adewale himself was often hungry as a child. Vast tracts of the country remain uncultivated, he said, and could be used for farming.

Some farmers in Nigeria have tried to adopt Western-style agricultural methods — using expensive chemical fertilizers and herbicides, for example — and have gone bankrupt in the process. Simpler, less costly organic methods to build good soil would have boosted their yields.

Before the advent of chemical fertilizers, Adewale said, everything in Nigeria was grown organically. Now, he said, the country’s farmers are losing that traditional knowledge.

“I am a little passionate about how we address the critical environmental challenges we have and, at the same time, feed people,” he said.

Adewale was raised by his grandmother, Abigail Abike Aluko, in Ilesa, 200 miles from the Nigerian capital of Lagos. Although she did not go to college herself, Aluko had a fierce desire to make sure her grandson got a degree. When he was in high school, she borrowed money from a loan shark to pay for his entrance exam fees.

“She would do anything for my education,” he said.

Money was tight. The family diet consisted largely of cassava, a starchy root. Adewale helped contribute to the family income starting at age 6, selling palm oil in the market and assisting with the cocoa harvest at a nearby farm.

In the United States, big farms use science, technology and research to maximize yield, while employing less than 2 percent of the country’s population. But large-scale farming is also responsible for a significant amount of greenhouse gases, especially nitrous oxide, 300 times more potent than carbon dioxide, said Carpenter-Boggs, the WSU professor.

Adewale thinks Nigerian farmers need more information about ways to use organic methods to build up their soil, making their farms more fertile and productive, without using chemicals.

In Washington, part of his graduate studies included helping develop the free web tool called Ofoot that Adewale wants to use as the base for his mobile phone app in Nigeria.

In Africa, “just about everybody has smartphones and small solar stations to recharge them — it’s really an amazing degree of sophistication,” said Hayes, of the Bullitt Foundation. Teaching farmers how to farm more efficiently could allow Nigeria to take a huge step forward in agricultural production without the need for expensive chemicals and herbicides, he said.

He vividly remembers his grandfather, who died when Adewale was 10, telling him that the seasonal wet and dry patterns in Africa were changing.

Today, that’s a belief held by many Nigerian farmers who have never even heard the words “climate change,” yet perceive that the seasons have altered, making farming riskier economically, he said.

In his junior year of high school, Adewale passed the college entrance exam. He earned his bachelor’s at Obafemi Awolowo University in Nigeria, and was elected the national president of a society of agricultural students. That gave him the chance to travel around the country, talking to farmers and seeing for himself how the land was farmed throughout Nigeria.

In his junior year, he was offered an accounting job at Accenture, an international consulting firm, but he turned it down to become a farmer. Owning no land, he started his own farm by raising vegetables on vacant land near home.

“If the owner comes — we’ll talk about it,” he said, laughing.

He grew okra, amaranth and other popular African vegetables. He built an anaerobic composter to turn chicken manure into fertilizer and electricity, using information he’d picked up online.

Eventually he began renting land, and grew his farm from one plot to 5 acres, all farmed organically.

But Adewale wanted to learn more.

He found WSU’s organic agriculture major — the first such major ever offered at a U.S. university — in an online search. He used the $6,000 from his harvest to launch his master’s degree.

Still, he believed he’d come to the right place. Before his money ran out, he secured a research position at WSU to help fund his master’s degree and, later, his Ph.D.

The Bullitt prize money comes with no strings attached.

“It is a gesture of faith that this is a guy who’s deeply committed to getting something done in the world,” Hayes said, “and we’re trying to give him a financial boost to help him do it.”

Adewale is eager to take on the challenge.

“Every time I make these crazy decisions, I hear my grandmother’s voice in my head,” Adewale said. “She said, ‘Dare to make a difference.’

RE: 81 of Buhari’s 100 appointees are northerners