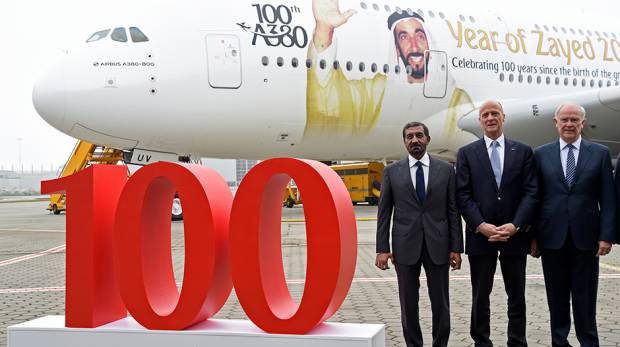 Shaikh Ahmad bin Saeed Al Maktoum, Chairman and Chief Executive of Emirates Airline and Group on Friday in Hamburg, Germany denied talks of a merger between Emirates and Etihad airlines.

He said it was all rumours as the airline welcomed its 100th A380 to its fleet at a special ceremony held at Airbus’s manufacturing facility in Hamburg.

Emirates is the world’s largest operator of A380 aircraft, flying the iconic double decked jet to 48 cities in six continents on scheduled services.

Emirates has ordered a total of 142 A380s at a total value of $61 billion in the coming years.

EmiratesEtihad
Share
Subscribe to our newsletter
Sign up here to get the latest news, updates and special offers delivered directly to your inbox.
You can unsubscribe at any time