Investigation: How Senator Misau Tried To Temper With His Police File 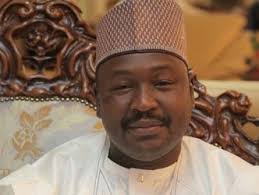 [dropcap]F[/dropcap]acts have continued to emerge that Senator Isa Hamma Missau, who was known and called Mohammed Hamma tried severally to influence the tempering or removal of queries and warnings in his record of service in the Police Force but met a brick wall.

Our correspondent gathered that Senator Misau had one of the worst records as an officer which he wanted removed from his file while in service owing to his fear that his opponents might use such ignoble accounts against his future political interest.

Our correspondent gathered that in one instance when he met the Police top command for the cleansing of his records, he was politely told to forget it as such documentation are archival police material that cannot be tempered with owing to the serialization of the papers in his file and the different officers that made remarks and signed documents in the file.

This Senator Misau did not find funny and quickly went the President of the Senate, who he knew had issues to grind with the Police top hierarchy with a promise that he would be able to force the Inspector General of Police to dance to the tune of the Senate leadership or they make the seat too hot for him.

It was gathered that while serving in the Nigeria Police Force (NPF), Senator Misau, who was known in the Police Force as DSP Mohammed Hamma was not only a serial offender but also had a poor service record that included his admittance of visiting unholy places.

However, the former Police officer turned lawmaker had insisted then that he only paid a visit to a herbalist in search of traditional cure for a strange ailment that tormented his health while in service.

In poorly written answer to a query issued to him on 6th November, 2005 and addressed to the Commanding Officer of the 44 PMF, FHQ, Abuja, the then young officer, DSP Hamma said: “It is true that I was absent without permission for the number of days stated owing to what he described as; “was because of sickness I have found myself into.”

According to him; “I was sick for a long time, since I was a Divisional Crime Officer, Wuse Division, Abuja. I have visited so many hospitals, including National Hospital Abuja, which I was diagnosed and x-ray was taking and all proved that there is nothing they have seen or detected that I am alright, but myself I knew there is something disturbing me.

“I confided on a friend and made him know what I am going through, which he told me that he would take me to a native doctor in a village under Abaji Area Council on 28th October, 2005 at about 10:00hrs we embark on the trip to see the Native doctor. I was given concussion which I drank and it turn out that my system did not agree with it and it became position to me. I started vomiting and stooling which lead to my unconsciousness for days in that village.

“The person that took me there refused to rush me to the hospital for fear of being arrested according to him, and that the native doctor convinced him that is normal everything would be alright, they tried and luckily I survived it.”

Documents made available to our correspondent also revealed that another query, dated January 16, 2009 and signed by CP Suleiman Abba, was served on Hamma, with the title, ‘Query For Serious Misconduct’.

The Course commenced on 05/01/2009 and you contemptuously failed to report for the course despite the long notice.”

He was accordingly found guilty of disobedience of lawful Order without good and sufficient cause, for refusing to attend Junior Command Course 49/2009 at the Staff College, Jos, contrary to rule 04401 (iv) of the Public Service Rule 2000.

The former Police officer was also found guilty of negligence of duty and discreditable conduct as the sum total of his conduct was found to be prejudicial to discipline and unbecoming of an officer of the rank of DSP, contrary to rule 0430 (i) of the Public Service Rules 2000.”

To cap it all, in 2006, DSP Hamma was served a warning letter that was signed by ACP HM Dagala, who was then the Commander of the Police Mobile Force, Abuja.

The warning letter read in part; “You will recall that you were queried for being absent from duty without leave/permission vide letter No. CH:6350/44PMF/B/FHQ/ABJ/-VOL. 1/26, and dated 8th November, 2005.”

The warning was issued after the Commissioner of Police (PMF), carefully considered his representation to the query and found him liable in all instances of unquestionable conduct that is not expected of a Superior Police Officer (SPO).

NPFSenator Misau
Share
Subscribe to our newsletter
Sign up here to get the latest news, updates and special offers delivered directly to your inbox.
You can unsubscribe at any time