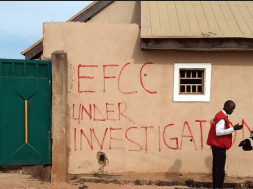 Abuja – The family of the embattled former chairman of the Presidential Pension Reform Task Team, Alhaji Abdulraaheed Maina on Wednesday faulted the action of the Economic and Financial Crimes Commission (EFCC) in sealing off some properties allegedly owned by the embattled former pension boss.

They family said they have accordingly contacted their lawyers to sue the EFCC for violation of their rights and dragging the name of the family in the mud.

They also assured that following the ordeal suffered by their brother over his reinstatement into the civil service, they are determined to expose members of the cabal in the Presidency.

The family members represented by their spokesman, Malam Aliyu Maina, who was flanked by Salihu Maina and Ladan Abdullahi, said they are worried that the image of the entire family has been tarnished following the sealing off of properties belonging to the Maina by the Economic and Financial Crimes Commission (EFCC).

The family accordingly vowed to take legal action against the EFCC.

Aliyu Maina said; “The cabals have gone to the extent of marking our house in red paints with an inscription of E.F.C.C under investigation. The EFCC is wrong in their action because Abdulrasheed inherited so many properties from his late father in Kaduna and Abuja, some of them were built before he was born so how could he have acquired them fraudulently?

“The entire family of Abdullahi Maina is categorically stating that our son is not in any way a fraudster, rather he is a messiah who brought reforms into Nigerian Pension Scheme, whose effort saw the disappearance of pensioners roaming the streets of Abuja and other state capital in Nigeria.

“The recent actions may have been targeted at not Maina but high above. We are aware that all these acts of calumny is not targeted against Abdulrasheed Maina alone but against the President of Federal Republic of Nigeria and the office of the Attorney General.”

The EFCC on Tuesday in Kaduna sealed and marked six houses for investigation allegedly belonging to Maina in Kaduna.

The properties included a 2- storey shopping plaza situated at number 2C Ibrahim Taiwo Road and a one storey duplex at Katuru Road and four houses in Kawo new extension area, all in the State capital.

Maina
Share
Subscribe to our newsletter
Sign up here to get the latest news, updates and special offers delivered directly to your inbox.
You can unsubscribe at any time

Investigation: How Senator Misau Tried To Temper With His Police File