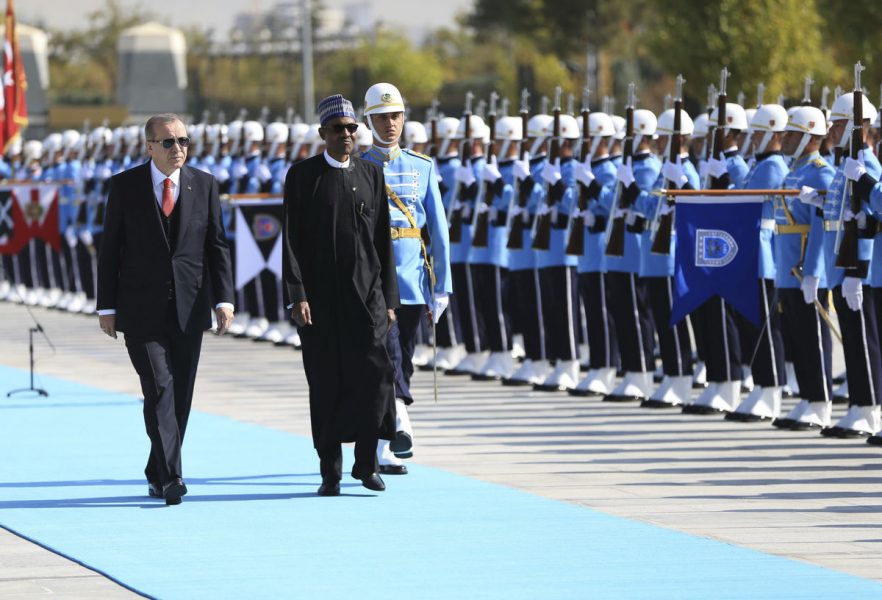 [dropcap]T[/dropcap]urkish President Recep Tayyip Erdogan pledged cooperation with Nigeria in its fight against Boko Haram but said he expected the nation’s support against a movement led by U.S.-based cleric Fethullah Gulen whom the Turkish government accuses of orchestrating last year’s failed coup.

Speaking at a joint news conference Thursday with  President Muhammadu Buhari, Erdogan reiterated Turkish assertions that schools run by Gulen’s movement in Africa were being used to raise “militants.”

On July 15 last year, in an attempted coup, a faction of the Turkish military bombed government buildings, blocked roads and bridges and attempted to overthrow President Recep Tayyip Erdogan. The coup attempt was quelled by the next day — but Turkey has been feeling the repercussions ever since.

The Turkish government has engaged in sweeping purges, arresting tens of thousands and firing more than 100,000 people from their jobs, including civil servants, university professors and soldiers.

But the primary target of Erdogan’s wrath is Fethullah Gulen, an Islamic scholar in his late 70s living in exile in the United States, Per Second News gathered in Ankara. Erdogan blames Gulen for masterminding the failed coup attempt. The government has declared Gulen’s movement a terrorist organization.

Gulen, who is said to have millions of supporters in Turkey, has steadfastly denied any responsibility for the coup — but Turkey is demanding his extradition from the U.S., where he has lived since the late 1990s.

“To this day, I have stood against all coups,” Gulen told journalists recently.

Buhari is in the Turkish capital for a meeting of “Developing-8” countries, which also includes Bangladesh, Egypt, Indonesia, Iran, Malaysia and Pakistan.

Erdogan also said Turkish customs authorities were engaged in talks with  Nigeria counterparts over how hundreds of rifles allegedly made their way to Nigeria from Turkey.

GulenNigeriaTurkey
Share
Subscribe to our newsletter
Sign up here to get the latest news, updates and special offers delivered directly to your inbox.
You can unsubscribe at any time

The devil is keeping millions enslaved in Nigeria with “lies, cowardice and corruption, says abducted priest