[dropcap]S[/dropcap]triking health workers under the auspices of the Joint Health Sector Unions (JOHESU) on Tuesday finally suspended its 13- day old strike after making a deal with the federal government that their grievances would finally be settled.

JOHESU ordered its members nationwide to go back to their places of primary assignment from October 5.

In a statement signed by its Chairman, Biobelemoye Joy Josiah and one Florence Ekpebor, the health workers said they have received all documents relating to the agreement with the Federal Government.

It directed all five members unions of JOHESU to hold their various congresses on Wednesday to bring the content of the signed agreement to the attention of their members while preparing to resume work on Thursday. 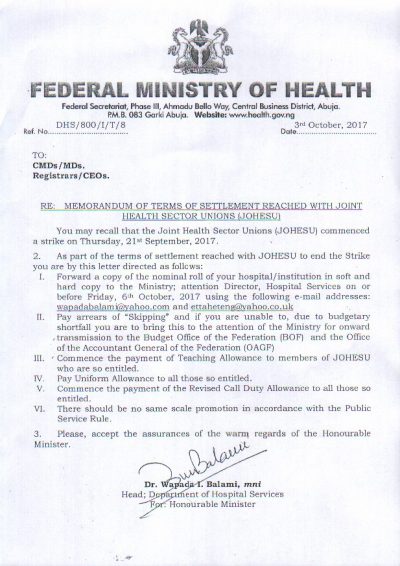 “All branches are to hold their congresses tomorrow, Wednesday, 4th October, 2017, and bring the contents of the agreement and the circulars to the attention of members and thereafter, prepare to resume their duties on Thursday, 5th October, 2017.

“Sequel to the receipt of the agreed circulars as part of the terms of settlement reached between the Federal Government and the Joint Health Sector Unions (JOHESU), on Saturday 30th September, 2017, to end the strike which was suspended in principle, after the signing of the terms of settlement; a special meeting of the National Executive Committee (NEC) of the unions in JOHESU rose at 7.00 p.m. today, 3rd October, 2017, and resolved to inform members that copies of the signed agreement as well as the released circulars from the Federal Ministry of Health are being sent to all unions and branches of the unions comprising JOHESU.

“JOHESU wishes to thank members for their resolute stance to fight for their rights and assure them of our resolve at all times to provide good leadership as a deliberate policy of reciprocating such dutiful and loyal followership.

“We thank the government for building confidence into our membership by giving us positive glimpses that they would redeem other contents of the terms of settlement agreed at the negotiation on 30th September, 2017, especially, the five weeks moratorium agreed for the review of the Consolidated Health Salary Structure (CONHESS) and other salient issues contained therein.”

“We have every intention of resuming our strike if our demands are not met, said a member of JOHESU in a phone chat with Per Second News.

Health WorkersStrike
Share
Subscribe to our newsletter
Sign up here to get the latest news, updates and special offers delivered directly to your inbox.
You can unsubscribe at any time