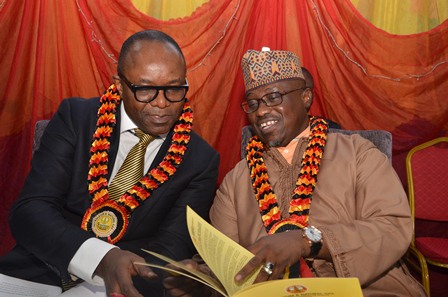 [dropcap]I[/dropcap]n the gigantic NNPC Tower, Minister of  State for Petroleum Resources, Dr Ibe Kachikwu and GMD of the NNPC, Dr Maikanti Baru both occupy some of the most coveted real estate.  The minister, enjoys the block D to the west, while  the GMD with outdoor patio occupies the A block.

But instead of a tightly functioning hive of productivity, the close quarters have become a nexus for a larger divide among the two men occupying the highest position in the petroleum industry.

In a letter to president Muhammadu Buhari, the minister of state, petroleum Resources, Dr Ibe Kachikwu, has accused the GMD, Dr Maikanti Baru of insurbudination and lack of adherence to due process.

” Mr President in over one year of Dr baru’s tenure, no contract has been run through the NNPC board, Kachikwu alleged in copies of the letter cited by Per Second News.

” The legal and procedural requirement is that all contracts above $20m would need to be reviewed and approved by the board of NNPC.”

“This is despite my diplomatic encouragement to Dr Baru to do so to avoid wrongfully painting you as a President who does not allow due process to thrive in NNPC.” “Given the history of malpractices and the public perception of NNPC as having a history of non-transparency, the NNPC tenders board, NTB, cannot be the final clearance authority for contracts it enters into.”

” The following major contracts were never reviewed by or discussed with me or the NNPC board.”

Kachikwu, alleged that the GMD has ran the corporation like a one man show. ” I learn of transactions only through publications in the media.”

” There are many more your excellency. In most of these activities the explanation of the GMD is that you are the minister of Petroleum and your approvals were obtained.”

” When I call for meetings, the GMD Baru chooses which meetings he wishes to attend and those he chooses to send subordinates, he sends those subordinates without courtesy of a call to explain his absence.”

“At inception I instituted a monthly Parastals review meeting with Head of Agencies and another with the oil senior management in all parastatals, the GMD objected to his senior staff coming to the joint senior management meetings.”

‘ He argued that this was overreaching his territory, I have tried to manage the bad perception created by GMD’s blatant insubordination and disrespectful attitude, I have worked hard to avoid being seen as petty and meddlesome, Kachikwu said.

“In order to convince your excellency to sideline me, I am sure I have been labelled as being, anti-north, corrupt and in collusion with militants.”

” I resumed work confronted by many publications of massive changes within the NNPC. Like the previous reorganizations and repostings done since Dr Baru resumed as GMD, I was never given the opportunity before the announcements to discuss these appointments.”  ” This is so despite being Minister of State Petroleum and Chairman NNPC Board.”

” I came to this job with the zeal to change the sector, it is in the spirit of service and absolute belief in your leadership and integrity that I have after one year of tolerating these disrespectful and humiliating conducts by the GMD decided to bring these to your attention.”

Per Second News investigations revealed that aides have created rival factions, according to several sources with direct knowledge, with discord between the two sides threatening to further derail the agenda.

BaruKachikwuNNPC
Share
Subscribe to our newsletter
Sign up here to get the latest news, updates and special offers delivered directly to your inbox.
You can unsubscribe at any time