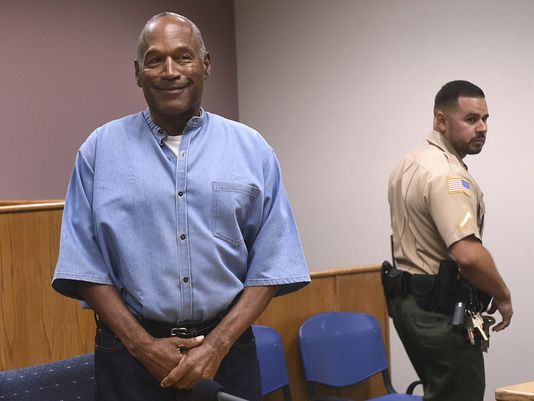 [dropcap]F[/dropcap]ormer football legend O.J. Simpson became a free man again Sunday after serving nine years for a botched hotel-room heist in Las Vegas that brought the conviction and prison time he avoided in the killings of his ex-wife and her friend after his 1995 acquittal in the “trial of the century” in Los Angeles.

Simpson was released at 12:08 a.m. PDT from Lovelock Correctional Center in northern Nevada, state prisons spokeswoman Brooke Keast told The Associated Press. She said she did not know the driver who met Simpson upon his release and didn’t know where Simpson was immediately headed in his first hours of freedom.

“I don’t have any information on where he’s going,” Keast added.

Neither Simpson’s attorney, Malcolm LaVergne in Las Vegas, nor state Parole and Probation Capt. Shawn Arruti, who has been handling Simpson’s case, immediately responded to messages.

Keast said the dead-of-night release from the prison about 90 miles (145 kilometers) east of Reno was conducted to avoid media attention.

Simpson also plans to get an iPhone and get reacquainted with technology that was in its infancy when he was sent to prison in 2008, his attorney said.

The Florida Department of Corrections, however, said officials had not received a transfer request or required documents, and the attorney general said the state didn’t want him.

“The specter of his residing in comfort in Florida should not be an option,” Florida Attorney General Pam Bondi said in a statement on Friday. “Our state should not become a country club for this convicted criminal.”

Close friend Tom Scotto, who lives in Naples, Florida, has offered to have Simpson live at his house. Scotto also didn’t immediately respond to messages about Simpson’s plans.

Simpson lost his home near Miami to foreclosure in 2012.

He could live at least temporarily in Las Vegas, where a friend let Simpson use his home for five weeks during his robbery trial.

His five years of parole supervision could be reduced with credits for good behavior.