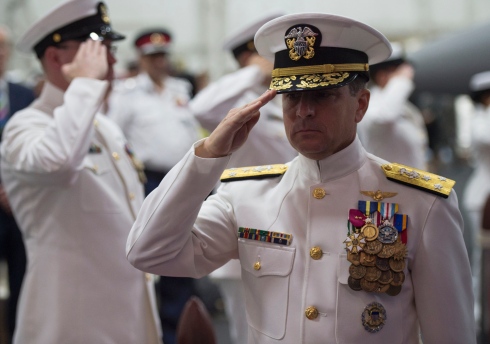 [dropcap]T[/dropcap]op US commander in the Middle East, Vice Admiral Kevin M. Donegan on Monday, accused Iran of  smuggling illicit weapons and technology into Yemen, stoking the civil strife there and enabling Iranian-backed rebels to fire missiles into neighbouring Saudi Arabia.

“These types of weapons did not exist in Yemen before the conflict,” said Donegan. “It’s not rocket science to conclude that Al Houthis are getting not only these systems but likely training and advice and assistance in how to use them, he said in a lengthy interview with the Gulf news.

Donegan said that the bitter rift between Qatar and many of its Gulf neighbours, including Saudi Arabia and the United Arab Emirates, who accuse Qatar of financing militants and having overly cosy relations with Iran, has not yet hindered coalition efforts to battle terrorism, piracy or other mutual maritime scourges.

Iran has been repeatedly accused of providing arms helping to fuel one side of the war in Yemen, in which rebels from the country’s north, Al Houthis, ousted the government from the capital of Sana’a in 2014.

The officer, Vice Admiral Kevin M. Donegan, said that Iran is sustaining Al Houthis with an increasingly potent arsenal of anti-ship and ballistic missiles, deadly sea mines and even explosive boats that have attacked allied ships in the Red Sea or Saudi territory across Yemen’s northern border.

Donegan gave his assessment in an hourlong telephone interview from his 5th Fleet headquarters in Bahrain as he prepared to conclude his two-year tour, and take a new assignment at the Pentagon.

Vice Adm. Kevin M. Donegan, is the commander of the 5th Fleet, overseeing the U.S  Navy’s contribution to the fight against the Islamic State in Iraq and Syria.