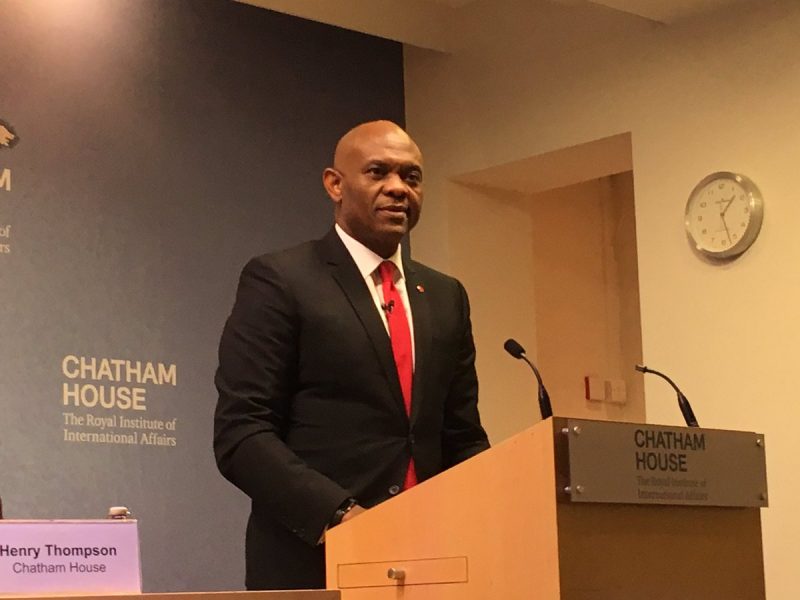 Speaking at an event tagged “Growing Businesses of Scale in Sub-Saharan Africa: Job Creation, Innovation and Industrialization,” Elumelu said that Africa’s greatest challenge is the pervading negative narrative about the continent.

“I believe that the greatest challenge Africa has as a continent when it comes to attracting investment is in the way it is portrayed. Information presented about Africa is neither holistic nor properly contextualized, and has led to the kind of narrative that we have had for so long on Africa. As an investor, when all you have heard about Africa is corruption, how would you pass a positive investment decision to go and invest in the continent? The result is that the vicious cycle of neglect continues and is even reinforced.”

The Chairman of Heirs Holdings, a pan-African investment firm with interests in financial services, power and oil & gas, called for an urgent “reset of mindset” to attract the level of global private capital that will drive job creation and reduce poverty on the continent. “We must reset the way we see and discuss Africa. People do business with people they are comfortable with. Investors who repeatedly hear horrible things about our people and the continent will never invest here. We will continue to host national gatherings and seminars to discuss unemployment, poverty and income inequality if we do not fix the existing information asymmetry, the poor quality of information that is put out.” 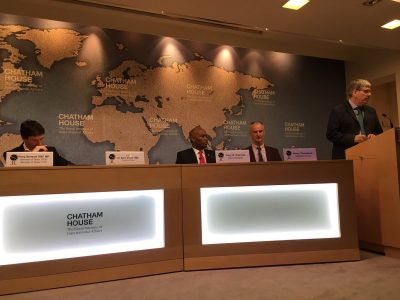 Elumelu, one of Africa’s foremost entrepreneur also said that long term private investment in electricity infrastructure will create an enabling environment for business growth in Africa.

Elumelu whose Transcorp Power Plc has invested $2.5b in President Obama’s Power Africa Initiative and is also currently the largest thermal generator of electricity in the country, called on local and foreign investors to invest in electricity, stating that this more than any other investment “will encourage the creation and growth of businesses of scale in Africa.” According to him, “long term private investment in electricity infrastructure will create an enabling environment for business growth.”

The event launched a new Chatham House Africa Programme report on growing businesses of scale in sub-Saharan Africa. The event brought together senior policymakers, business representatives, civil society and other experts to discuss opportunities for creating jobs in sub-Saharan Africa through the scaling up of small- and medium-sized enterprise. 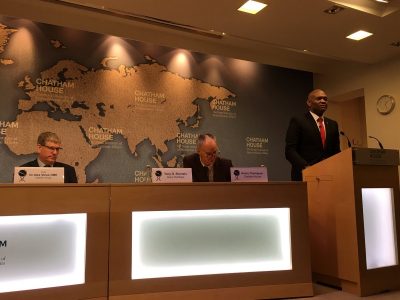 The Founder of the Tony Elumelu Foundation also rallied public and private sector stakeholders and the development world to increase support to African SMEs, describing them as “the lifeblood of our economy”. Elumelu, who has committed $100m to African entrepreneurs, emphasized the critical importance of mentoring and funding for the survival of small businesses. In a continent where only 700 companies generate over $500m in annual revenue, half the number in other regions, Elumelu called for targeted support to grow these small businesses into scalable companies capable of becoming big corporates in the future. According to Elumelu, SMEs are known to be the largest job creators and should be prioritized because of the inverse relationship between security and prosperity – “when there is prosperity, security is not an issue, but when there are fewer jobs, insecurity heightens.”