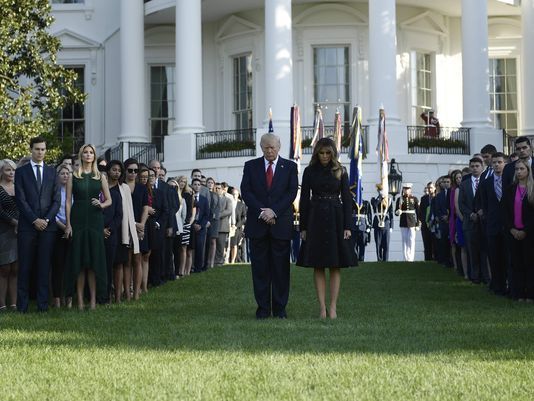 President Trump marked his first 9/11 anniversary Monday by avoiding talk of politics and paying tribute to those who lost their lives in the fateful terrorist attacks of 16 years ago.

“On that day not only did the world change, but we all changed,” Trump said during a ceremony at the Pentagon, one of the targets of hijacked airplanes on Sept. 11, 2001. “Our eyes were opened to the depths of the evil we face.”

“The terrorists who attacked us thought they could incite fear and weaken our spirit. But America cannot be intimidated, and those who try will soon join the long list of vanquished enemies who dared to test our mettle,” Trump said Monday morning.

While Trump has injected politics into previous ceremonial occasions – such as a Boy Scouts Jamboree in July in which the president eschewed tradition to jab the media and political opponents – he kept a somber tone to commemorate the anniversary of 9/11.

The first-year president honored those who lost their lives in the attacks. “We mourn them, we honor them, and we pledge to never, ever forget them,” he said.