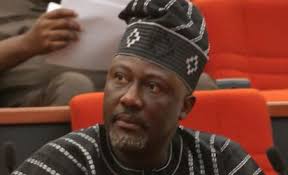 [dropcap]W[/dropcap]hen the Abuja Division of the Federal High Court ordered parties involved in the planned recall of senator Dino Melaye, to maintain Statusquo in July, he thought his future was clear.

But that was then. Now, just a few months later, the rookie senator is facing an unprecedented recall effort that could not only end his political career but also cost the ruling APC their undisputed control of the senate.

Justice Nnamdi Dimgba gave INEC the permission to go ahead with the process on Monday after dismissing Melaye’s suit for lacking merit.

Melaye had filed a suit seeking to stop INEC from recalling him from the Senate following a petition it received from the constituents of Kogi West Senatorial District, which Melaye represents.

According to the judge, “Melaye’s complaints are hasty, premature and presumptuous.’’

Dimgba, in his judgment, premised his opinion on the grounds that Melaye was hasty to run to the court and that he should have explored and exhausted the internal mechanisms provided by the 1999 Constitution.

He therefore ordered INEC to go ahead with its planned verification of signatures contained in the petition.

The judge, however, ordered INEC to furnish Melaye with a copy of the petition it received, a schedule of the signatories and a full list of persons in support of the recall petition.

The judge held that the constituents who wrote the petition to INEC seeking his recall were not under any duty to serve him with a copy of the petition or offer him an opportunity to defend himself.

“I do not believe that the petitioners have the duty to serve the plaintiff with a copy of the petition. The duty of the constituents is to write and submit their petition to the electoral body.

“There is no provision in Sections 68 and 69 of the Constitution that provides the scope for the writers of the petition to inform the plaintiff of plans to recall him or for him to come and clear himself of allegations levelled against him.

The trial judge held that the only option available for Melaye, was for him to go through the verification process to be conducted by INEC.

Meanwhile, the controversial senator has described the ruling by the Court as appealable.

“The presence of the Kogi State Attonery General and Commissioner for Justice in court today over a matter that Kogi State is not joined as a party shows the clear collaborative efforts of INEC and Kogi State Government, he said Monday afternoon.

“However, these combined efforts of Governor Yahaya Bello, INEC, top Federal Government officials and top security agents to harangue and stampede me out of the Senate against the will of Kogi West constituents will fail woefully. He who is with me from above is greather than all of them put together.”

“I will not stop speaking truth to authority. Kogi State Government must pay workers’ salaries and pay pensioners. We cannot all sleep facing one side of the bed. We shall overcome this temporary Shenanigan in the long run. We will neither sleep nor slumber on this. I use this opportunity to thank my dear constituents for their abiding love for and confidence shown towards me. God bless you all. Imole de, okunkun parada!”

Dino Melaye
Share
Subscribe to our newsletter
Sign up here to get the latest news, updates and special offers delivered directly to your inbox.
You can unsubscribe at any time

MDAs warned to seek clearance for IT projects