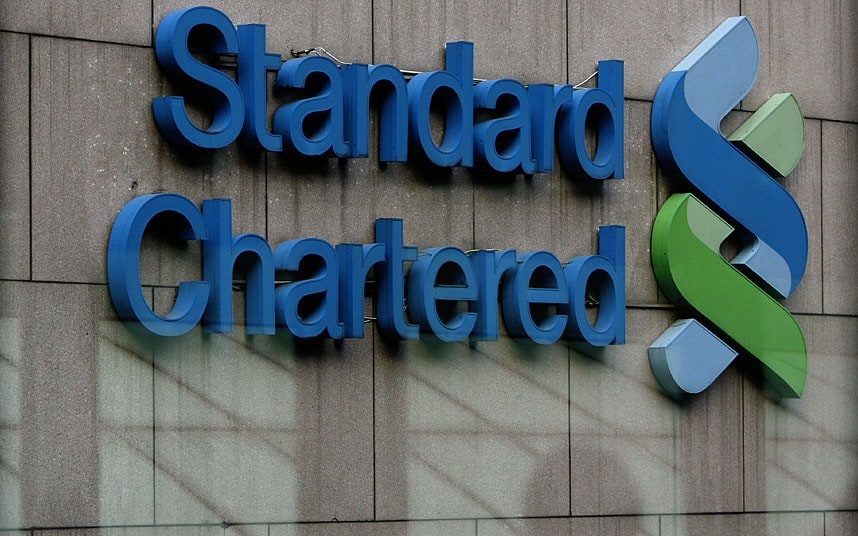 [dropcap]F[/dropcap]resh report Thursday revealed that since 2013, Standard Chartered has accumulated about $400 million in actual and provisioned losses on a portfolio of loans to diamantaires that once reached $3 billion, according to a bank official familiar with the matter.

Including lending to diamond miners and retailers, the bank’s total exposure to the gems was $4.5 billion. Chief Executive Officer Bill Winters, who took over two years ago, is still trying to clean up the mess, the report said.

Standard Chartered Plc’s plunge into the risky business of diamond lending began eight years ago with a cocktail party at its London headquarters.

Maurice Tempelsman, longtime escort of Jackie Kennedy and head of one of the biggest U.S. diamond companies, was there. So was diamantaire Dilip Mehta, who had been made a baron by the king of Belgium, and other luminaries from the industry of middlemen who buy rough stones from mining companies like De Beers, polish them and sell to jewelers and retailers. Flitting among the guests was the man who made it possible, Kishore Lall, recently hired to run the bank’s diamond-lending business.

How Standard Chartered became the world’s dominant diamond financier is a cautionary tale of a bank that thought it knew better than rivals, according to interviews with more than 20 people, including executives who worked at the bank and had knowledge of the loan process, according to investigations by a combined team of By Franz Wild , Thomas Biesheuvel , and Stephen Morris in a Bloomberg report.

Some of the people said the bank ignored risk warnings from its own employees. All of them asked not to be identified for fear of harming their careers.

“The diamond industry has deliberately wrapped itself in a cloak of obfuscation” the report said.

Diamond loans never accounted for more than 2 percent of Standard Chartered’s assets. But the business was emblematic of a wider pattern of what Winters has called “looseness” under previous management. Those practices resulted in the bank having to pay almost $1 billion to settle U.S. investigations into sanctions and money-laundering violations and promises by former CEO Peter Sands to raise the bar on conduct.

The fines didn’t relate to loans involving diamond companies, but fraud was an ever-present danger in a business where parcels of gems are moved from company to company and country to country, borrowed against at each step of the way.

“The diamond industry has deliberately wrapped itself in a cloak of obfuscation, and it should be treated with extreme caution by any outsider,” said Charles Wyndham, a former sales director at De Beers and founder of WWW International Diamond Consultants Ltd. “The parallels between what’s happening now in the diamond industry and what happened in the subprime crisis are so painfully obvious.”

A spokesman for Standard Chartered declined to comment. Lall, who left the bank in 2015, said in an email that fraud wasn’t rampant in the diamond industry, that the bank had a “strong, independent risk culture” and that it “simply didn’t happen” that his team ignored warnings.

Standard Chartered, Lall wrote, “was not an organization where it was prudent—or even possible—to violate bank policy and ignore risk.”

The February 2009 cocktail party, where the bank announced it had money to lend, came at an unusual time. It was five months into a global financial crisis, and other banks, including JPMorgan Chase & Co., Bank of America Corp. and HSBC Holdings Plc, were getting out of the diamond-financing business. Prices of rough stones had tumbled, sending shock waves through an industry that spanned mines in Botswana, traders in Belgium, polishers in India and jewelry stores in the U.S.

A few months earlier, Standard Chartered had hired Lall, a former chief financial officer of New York’s Gristedes supermarket chain. The son of an Indian diplomat and a graduate of MIT’s Sloan School of Management, Lall had remade himself as a diamond financier at Dutch lender ABN Amro NV.

But that bank, then the world’s leading diamond lender, was crushed by the financial crisis. That’s when Mike Rees, Standard Chartered’s head of wholesale banking, made his move. The London bank, which had weathered the crisis relatively unscathed, was looking for new opportunities. Rees, who declined to comment, wanted Lall to replicate ABN Amro’s business, according to people with knowledge of the plan. And he wanted it done fast.
Unlike gold or silver, diamonds are difficult to value,

Companies such as Eurostar Diamond Traders NV and Arjav Diamonds NV were soon borrowing hundreds of millions of dollars from Standard Chartered as it undercut rival lenders and offered flexibility on credit deals they couldn’t match, according to people familiar with the matter.

There was one snag. Compliance, credit and risk officers, as well as members of Lall’s own team, were raising red flags, according to some of the people. The credit team had strict rules. They had to check that buyers were real and credible; that the diamonds were actually being shipped; that the IOUs, known as receivables, were being paid; that those payments were servicing the loan; and that the bank’s share of debt to any company didn’t exceed 25 percent.
All that caution was for good reason. Because traders borrowed against sales, it was in their interest to inflate those numbers, according to people familiar with the industrywide practice. And unlike gold or silver, diamonds are difficult to value. They also come with a warning. U.S. government guidelines describe diamonds as “highly attractive to money launderers and other criminals, including those involved in the financing of terrorism.’’

There were other danger signs. Receivables are due to be paid within a certain period, usually 90 days, and the bank isn’t supposed to extend that by letting traders replace them with fresh ones. But that sometimes happened, according to people familiar with the practice, which meant Standard Chartered wasn’t getting reimbursed.

Lall and members of his team argued that the bank needed to back the biggest traders, that he knew them well and that they were good for the money, according to people with knowledge of the discussions. When challenged about potential fraud, he would ask for cast-iron proof. His superiors would often back him up, the people said, sending a clear message to risk and credit officers: Stop getting in the way of business.

Standard Chartered’s determination was put to the test in early 2013, after ABN Amro called in about $100 million of loans to Arjav Diamonds. That’s when Lall stepped into the breach and extended more credit to keep the trading company afloat, according to people familiar with the matter. Lall said the bank faced “difficult circumstances” because of the potential “negative ripple effects” on other clients, and that the additional accommodations extended to Arjav were fully secured and repaid.

Standard Chartered still has about $1.7 billion in outstanding diamond debt

That summer, Standard Chartered’s diamond bank had its first major default. Winsome Diamonds and Jewellery Ltd., a Surat, India-based jewelry manufacturer that had been borrowing from the bank long before Lall joined, was unable to make payments on $1 billion of loans. About 15 percent of them were from Standard Chartered, people familiar with the matter said. When Indian authorities investigated, they found that $700 million had been diverted to 13 companies registered in the United Arab Emirates. Winsome Director Harshad Udani said the company is trying to recover what it’s owed and settle its debts to Standard Chartered and others.

Losses continued to mount. Lall moved back to New York and left the bank in September 2015, when the team was disbanded. He said his departure was the result of global cost-cutting and that he left in good standing. Rees, who was promoted to deputy CEO in 2014 and earned $72 million over a six-year period, according to company filings, left in 2016.

Standard Chartered still has about $1.7 billion in outstanding diamond debt, according to two people familiar with the matter, part of $100 billion in risky assets across the bank that Winters, the new CEO, has said he wants to restructure. He has vowed to reassert central authority, tightening risk and compliance controls. Last year he introduced a new code of conduct, saying some senior staff flouted ethics rules and saw themselves as “above the law.”

The bank has been trying to sell its remaining diamond loans but hasn’t found a buyer at a recovery rate it’s willing to accept. And it may have trouble recouping the debt from an industry that has seen rough diamond prices fall by more than 20 percent over the past three years.

Banks in Dubai and India have started financing diamond cutters, polishers and traders. But many firms are facing a credit crunch.

One of them, Antwerp-based Exelco NV, owes about $40 million to Standard Chartered, according to people familiar with the matter.

Earlier this year, the company, which cut the 546-carat Golden Jubilee Diamond, lost its status as one of De Beers’s handpicked customers. In June, bailiffs raided its office on Schupstraat, the narrow street where much of Belgium’s diamond business is conducted, to seize gems and cash at the request of a creditor, Belgian lender KBC Group NV. A court ordered the assets returned saying the seizure was premature. Exelco, which took down its website after the raid, declined to comment.

Arjav Diamonds, another trading company that owes money to Standard Chartered, is also feeling the pain.
“They were very aggressive, they really wanted to lend money,” Arjav President Ashit Mehta said of the bank. “The terms and conditions were lenient from each and every point.”

By Franz Wild , Thomas Biesheuvel , and Stephen Morris of Bloomberg.

In 1965, the Standard Bank of South Africa merged with the Bank of West Africa acquiring businesses including a banking operation in Nigeria, which dated back to 1894. The name was then changed to Standard Bank of West Africa. Four years after the merger, Standard Bank Nigeria was incorporated locally to take over the business in Nigeria. In 1971, 13% of the share capital was placed with Nigerian investors. The end of the civil war saw a major economic upturn and as a consequence, the military government sought to increase local control of the retail-banking sector, hence the Bank’s investment in Standard Bank Nigeria (renamed First Bank of Nigeria in 1979) was reduced to 38%. Standard Chartered remained a shareholder of First Bank of Nigeria until 1996.