Osinbajo on Anambra Church Killings: We Will Find Those Responsible 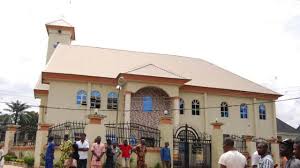 [dropcap]A[/dropcap]cting President Yemi Osinbajo, SAN, on Monday reiterated a commitment to ensuring that the perpetrators of the killings at St. Philip Catholic Church Ozubulu in Anambra State, are brought to justice.

According to statement signed by Mr Laolu Akande, Senior Special Assistant on Media, the Acting President has been in touch with the Anambra State Governor Willy Obiano, police authorities and other security agencies, and assures that the perpetrators of the heinous crimes would be brought to justice.

Akande, disclosed that the acting president has since been receiving regular updates on the status of investigations regarding the atrocious and mindless acts of violence yesterday at the St. Philip Catholic Church Ozubulu in Anambra State where worshippers were viciously attacked and a number of innocent Nigerians killed and injured.

Prof. Osinbajo condemns the despicable acts of violence, and commiserates with families, relatives, friends of the victims, the entire people and the government of Anambra State, he said.

Meanwhile, the Commissioner of Police in Anambra, Garba Umar, revealed that some suspects have been arrested in connection with the Sunday’s killings.

Mr. Umar told journalists on Monday that the number of arrest would not be disclosed so as not to jeopardise ongoing investigation into the massacre of 11 persons by unknown gunmen.

AnambraCatholicChurchKillings
Share
Subscribe to our newsletter
Sign up here to get the latest news, updates and special offers delivered directly to your inbox.
You can unsubscribe at any time