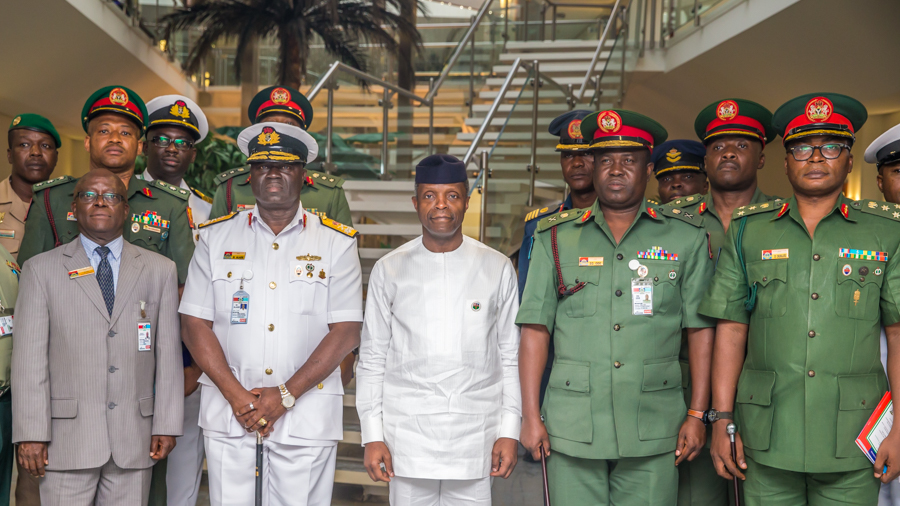 [dropcap]T[/dropcap]he Acting President after an emergency meeting with the Military chiefs has issued fresh directives to the Nigerian military and all security agencies to immediately scale-up their efforts and activities in Borno State in order to maintain a strong, effective control of the situation and secure lives and property.

Osinbajo, condemned the appalling ambush, attack and abduction of soldiers, and civilians who were carrying out their duties to the Nation in the Lake Chad Basin Frontier Exploration.

While commending the military for the progress already recorded with the rescue of some of the abducted, Prof. Osinbajo has also ordered the continuation of search and rescue missions to locate and ensure the freedom of all remaining abducted persons as soon as possible, using all available and expedient means in the circumstances. He adds that justice would be pursued for the victims and against those who engage in this kind of unacceptable, criminal and terrorist conduct.

“Some of these extraordinarily selfless Nigerians from the NNPC and the University Of Maiduguri put their lives on the line that we and generations to come will enjoy the resources of this land. We will never forget that sacrifice, he said.

He paid tribute to the resilience, courage and bravery of officers and men of the Nigerian Armed Forces for their gallant endeavours and sacrifices for the peace, security and territorial integrity of our country. He eulogises the Nigerian soldiers who have paid the ultimate price in this mission and others linked to the current insurgency, and gives a firm assurance that the welfare of the families of the soldiers will be prioritized.