[dropcap]T[/dropcap]he Lagos State Governor, Mr Akinwunmi Ambode has deposed the suspended Baale of Shangisha in Magodo, Chief Yusuf Ogundare for faking his abduction in a bid to embarrass the state government and security operatives.

“This is to inform the general public that His Excellency, Governor Akinwunmi Ambode has authorized the deposition, prosecution by police of Chief Yusuf Mutiu Ogundare, Baale of Shangisha with immediate effect, said a statement on Sunday signed by the State’s Commissioner for Local Government and Chieftaincy Affairs, Hon Muslim Folami. 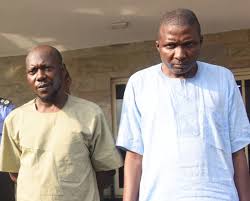 Ambode ordered Ogundare to henceforth desist from parading himself as the Baale of Shangisha or discharge any duties attached to chieftaincy matters in the State.

“This is in accordance with Section 38, subsection 1 of the Obas and Chiefs Laws of Lagos State inter-alia “The Governor may suspend or depose any Oba or Chief whether appointed before or after commencement of this law, if he is satisfied that such suspension or deposition is required according to customary law or is necessary in the interest of peace or good government.”

“Furthermore, he (Ogundare) is to stop parading himself, purports to exercise or discharge any of the duties attached to Chieftaincy Matters with immediate effect.”

The State’s Commissioner of Police, Mr Fatai Owoseni, while parading the suspects at the Lagos House in Ikeja, had narrated how they conspired to perfect the fake kidnap, all in a bid to implicate the Oba of Magodo, as well as rubbish the State Government and security agencies.

Owoseni said luck however ran out on Ogundare when he was apprehended by men of the Rapid Response Squad (RRS) in Alausa area of the State on July 11 after he was dropped in a suspicious manner by a car which sped off immediately.

Giving details of how Ogundare was apprehended, Owoseni said: “On July 11 at about 10pm, a team of RRS patrol officers working around Alausa had sighted a vehicle drop a male adult in a suspicious manner close by Shoprite along the Secretariat road. The speed with which that car drove off attracted them to that spot and fortunately before they got to the spot, the car had taken off and a quick enquiry revealed that it was the Baale that was allegedly kidnapped.

“Immediately after while Ogundare was being debriefed, he sold a dummy that the kidnappers dropped him off but unknowingly to him, it had been found out that on the 5th of July, the day he was allegedly kidnapped in Lagos, investigation had revealed that he was driving around in Ibadan around Ashi; he went to Ilorin, he went to Iwo, he was just on a frolic.

“And unknowingly to him as well that because of information that had gotten to security services that his younger brother and his wife were being questioned and were actually in custody because of some discrepancies that were noticed in the interaction they had with security agencies, and in furtherance of the synergy existing between the Police and DSS, we jointly compared notes and our findings were such that the act of the chief was despicable and amounted to crying wolf where there is none,” Owoseni said.

He said while making reports, Adams had told security agencies that he was with the Baale at CMD Hotel when some people who claimed they wanted to buy land whisked them away and later dropped him, but investigation revealed that he (Adams) was not at any time in the hotel with the Baale but was only at the restaurant of the hotel, and after some minutes, he left, and the wife of the Baale actually drove the Venza car allegedly used to abduct the supposed victim into the hotel.

The CP added that after the suspects were confronted with the indisputable facts, they had no choice than to confess faking the kidnap.

The CP said immediately after Ogundare was allegedly kidnapped, Adams went to the community and called the town crier to order the whole community to close shops and markets should not open, an action aimed at inciting members of the community against the State Government.

He said the objective of the suspects was to falsely accuse the Oba of Shangisha as the brain behind the kidnapping, which they indeed did, as a vengeance to him being installed the Oba instead of Ogundare, and also embarrassed the State Government and as well as security agencies for arresting him (Ogundare) when he falsely displayed the plate number of Oba of Shangisha on his car.

AbductionLagosMonarch
Share
Subscribe to our newsletter
Sign up here to get the latest news, updates and special offers delivered directly to your inbox.
You can unsubscribe at any time