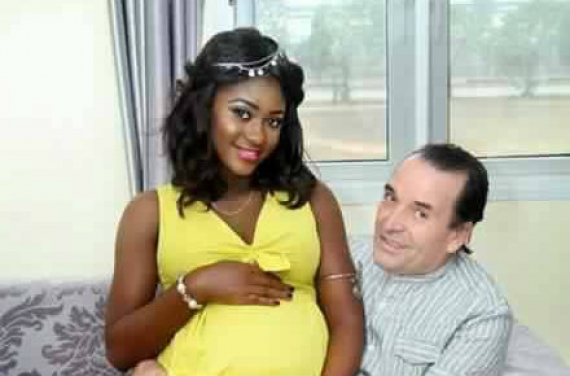 But Arlindo Defreitas, a Portuguese national living in Lagos, never thought his wife would be one of those statistics. After all, he attended almost 5 years of medical school back in Portugal.

But when his wife took a turn for the worse during a cesarean section at the Medical Art Center (MART) in Lagos, he went from being confident to helpless and lost husband, afraid of questioning the care she was getting, for fear it would become worse.

Arlindo, who now has to care for his son alone after his wife died following the cesarean section, says his wife was killed by doctors at the Mobolaji Bank Anthony Way, Onigbongbo, Lagos, based hospital.

“When I entered the theater all her organs was scattered around, I couldn’t look , it was like the work of a butcher.” I told the doctor my wife is not a cow, he said.

According to him, after 4 years trying to conceive, his wife finally got pregnant and was a pre-natal care patient at the MART Hospital.

” Last week Friday at 41 weeks of pregnancy, doctors at the hospital told us that no baby water was seen and as a result a cesarean section operation must be done as soon as possible.” The procedure was done and the baby was delivered by 8.30 am on Saturday, and we were very happy- for a short time, he said.

“I was very happy even though the baby almost died as I was told by the doctors that the baby was almost ‘strangled’ by the umbilical cord, the head was red and one arm was white, the skin was very wrinkled.”  “My wife was moved out of the theater and transferred to a private room to recuperate”‘ At some point she was in excruciating pain, and the doctors kept giving her doses upon doses of pain killers”.

“I was uncomfortable and I told them that from my experience as a medical student years ago I think my wife  hemorrhaged.  At that point Arlindo watched as her condition steadily worsened, until doctors asked him to leave the room. He claimed that after his persistence the doctors ran a test and said that his wife lost a lot of blood during the cesarean section.

“I was asked to leave and wait for a call before coming back, so I went home”.

In the words of Michael Klimek, a friend of Arlindo and a fellow European from Germany, ” after she delivered the baby, the doctor told her that she have to drink 5 bottles of water.” I was shocked,  everybody knows how dangerous it is for a woman that just underwent C-Section to drink water”. ” After drinking the water, the bleeding started and it won´t stop. They gave her 2 bags of blood-transfusion, but it was not helpful.”

“Hours later the doctors said they have to cut her open again to find out what was going on with her, Klimek said in shock. At that point the husband said he was told that she has low blood a 12.7% packed cell volume (PCV)”.

” I said why can’t you use ultrasonic Tools and scans to see what’s going on, instead of cutting her open again and allowing her lose more blood which is already a problem”.

“I was an emotional wreck by this point.” I never gave consent for the second surgery, nobody in my wife’s family did, Arlindo told Per Second News. “Until this moment cause of death is still unknown”.

“I don´t understand this doctors and hospitals. This “Photoshop certificate Doctor” killed our best friend and for this he must be imprisoned for life and the MART Hospital shut down for ever. And none of this doctor or nurses must practice in this profession again, said an angry Klimek, friend of the husband.

” I am from Germany and when this things happen in Germany or Europe, the government conduct an investigation, I hope, this will be the same here, he asked.

“Now I can understand, why your president went to medical check up outside of Nigeria, he concluded.

The husband of the deceased claim that one Dr Moses butchered his wife to death, “yes Moses killed my wife”. ” After they noticed their mistake they refuse to tell me details, I called them continuously and they won’t pick my phone”.

Per Second News reached out to the hospital and the chief medical director, Prof Oladapo Ashiru, said the Mart medicare gave the deceased high quality care with experienced professionals.

” The lady Amaka, was young, she said she was 24 but she looked 21″. ” He said all those that attended to her from the Obstetrician to the Anesthesiologist and Nurses are well experienced professionals.  Ashiru said he has well over 40 years experience. He revealed that he was not part of the team that worked on Amaka and directed us to the consultant who spoke to Per Second News about what transpired.

According to Dr Makewu of the MART hospital,  “with the help of fertility doctors from the MART Center, Amaka Defeitas, conceived using IVF, after which we had a meeting with the couple detailing a 13 week management plan that includes C-section at birth.

“Mr Defreitas rejected the C-section saying he wanted his wife to have it the natural way, despite several medical advice from us”.

“At 37 weeks there was no sign of labor and they were still insisting on natural means”. I didn’t see them or hear from them again until I called them at 39 weeks and she said she travelled and was not around”. “They finally came when the pregnancy was a 41 weeks.  ” After a scan no baby water was seen at that point I told them categorically that a C-Section must be done immediately.”

“We did the procedure and the baby arrived Saturday morning, except for the umbilical cord that was around the baby’s neck, everything was fine, both mother and baby were fine and we even moved her out of the theater to the normal room for her to recuperate.”

” Hours after the first surgery she started complaining of tummy ache and severe pain, despite the pain killers being administered on her, she also complained of abdominal pain.

“She was pale and we ran a test and found out that her blood level was 12.7 percent low, at that point we did the second surgery to find out what was the cause of pain”. Dr Makewu put the blame at the doorsteps of the Defreitas, saying the operation should have been done weeks before the 41 week period.

Asked about cause of death, he said autopsy is currently being carried out. But Mr Defreitas insists that it was an error on the part of the doctors to cut his wife open for the second time within a 24 hour period.

Justifying his claim, Defreitas, said he did not give his consent for the second surgery because he expected the hospital to do a comprehensive CT-Scan of the Pelvic & Abdomen to get the right diagnosis, rather the doctors did a normal blood test which will never tell you if a patient has a blood clot or something more fatal.

” I insisted in scan but before I arrived at the hospital they already cut her open and allowing her to lose more blood leading to her death”.

A doctor close to the family said ” Possibly she bled a lot at first surgery, maybe the womb did not contract well also”.  ” She could also have had a DIC (Disseminated Intravascular Coagulation) an acquired bleeding disorder from too much blood loss, which makes it impossible for the body to stop further blood loss”.

Defreitas, a retired professional with Lufthansa, German airline opened up in a lengthy discussion with Per Second News about living with the heartbreaking loss of his wife, Amaka, an Imo state indigene.

The family are still in shock and traumatised over the mysterious death of Amaka Defreitas, with the husband demanding that an independent postmortem be done on the remains of his wife.

” We travelled all over the world together and looking forward to spending our lives in Nigeria, its so sad, I don’t know what to do next”.

Speaking with Per Second News Dr Tiffany Jones, a US based obstetrician, said the case of the late Amaka Defreitas, is both pathetic and curious, wondering the rationale for making her go under the knife within 24 hours after the C-Section. She said the most common reason women die during C-sections is bleeding. Bleeding can be fast and severe and by the time any medical protocol can be instituted, sometimes it’s just too late.
” That is why I believe the second surgery was not necessary”.

Our thoughts and prayers go out to Amaka’s husband, family and son during this difficult time.

Per Second News obtained graphic images of the late Amaka inside the theater. The photographs are too upsetting to publish as some readers may find disturbing.