He strongly condemned Kanu’s abduction and extraordinary rendition from Kenya, saying that time has come for the US to call the Nigeria Government to order. 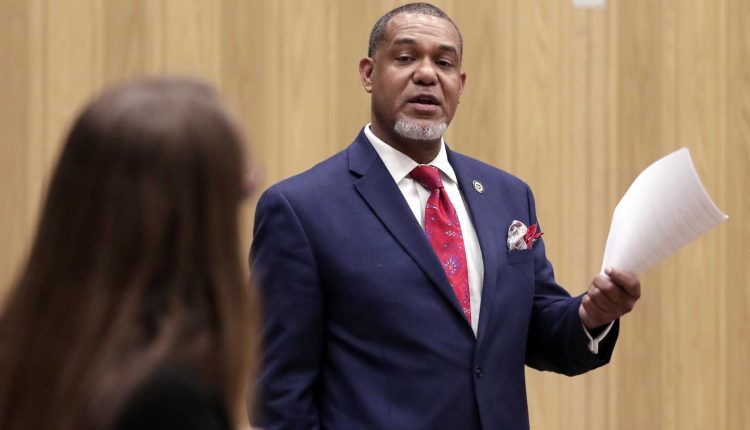 U.S. Congressman, Rep Jarvis Johnson, has urged the United States Government to intervene in the continued detention of the Leader of the Indigenous People of Biafra (IPOB), Mazi Nnamdi Kanu.

He said the IPOB leader was being illegally held contrary to UN Opinion and several Nigeria court judgments ordering his unconditional release.

The State of Texas congress man who made the demand in a statement dated January 9, 2023, said it would be wrong for the US which had defended democracy in different parts of the world to sit idly and watch the Nigerian Government fragrantly violate both its rules and international laws.

He accused Nigerian government of carrying out genocide against her citizens.

Johnson maintained that Kanu committed no crime by asking for a referendum for the self determination of his oppressed Biafrans.

He strongly condemned Kanu’s abduction and extraordinary rendition from Kenya, saying that time has come for the US to call the Nigeria Government to order.

The statement made available to Vanguard read in part:”Mazi Kanu’s only offence is that he is the leading advocate for the freedom of all oppressed Nigerians, and for a referendum on the Biafran issue. The right of free speech including political advocacy is a cornerstone of all democracies.

“At a time when democracy is threatened globally, it is imperative that we all join hands to protect Mazi Kanu’s right of freedom of speech.

“The illegal kidnaping, torture, and solitary confinement of Mazi Kanu offends our democratic norms. So does the willful disobedience of the judgments of its own courts by the Nigerian government.

“I am demanding for the immediate release of Mazi Nnamdi Kanu. The Government of Nigeria needs to comply with the UN Mandate and the Orders of its own Courts.

“The Nigerian government is carrying out another form of genocide, one citizen at a time. I am calling on the American Government to get involved to stop this genocide.

“We have protected other countries around this world to help vulnerable populations; we need to do the same for Nigeria and it’s Biafran citizens.”

The US congressman who described Kanu “as the foremost Freedom Fighter for the rights of oppressed people in Nigeria”, said he should not be allowed to suffer any more.

He warned that he might die in detention following his worsening health condition should the US and the world fail to act.

“For over 19 months, after he was kidnapped in Kenya, tortured, and illegally taken to Nigeria, he has been in solitary confinement. In July 2022, a United Nations Working Group, after its deliberations on his matter, called for his unconditional release. The Nigerian Government has not complied.

”In October 22, several Nigerian trial and Appeal courts, acquitted and discharged him of all the bogus charges levied against him by the Nigerian government.

”The Nigerian Government has refused to obey the orders of its own courts, and Mazi Nnamdi Kanu remains in solitary confinement enforced by its Secret Police.

“Mazi Kanu’s health conditions have been ignored by Nigeria’s Secret Police. He has been denied access to his doctors and to the regular supply of his medications. His health has increasingly detoriorated, and it is now feared that he may die in solitary confinement,” the congressman said.

IPOB Leader Nnamdi KanuJoe BidenUnited States
Share
Subscribe to our newsletter
Sign up here to get the latest news, updates and special offers delivered directly to your inbox.
You can unsubscribe at any time