Celebrities, fans pour encomiums, pray for singer on his birthday

Davido to miss his uncle’s inauguration as Osun Governor

Nigerian music star, David Adeleke, a. k.a Davido had looked forward to his 30th birthday bash with so much fanfare and ecstacy.

Information gathered by Per Seconds News revealed that his whole team led by some of his close allies and family members were said to have been planning a surprise birthday party in Atlanta and Dubai for the IF singer.

Those who know the family would confirm that visiting Dubai for the end of the year review of 30BG activities is sacrosanct and they had hinged the party on this premise.

But the twist of fate has punctured the celebrations that would have ushered Davido into age 30 following the death of his son, Ifeanyi in October.

Findings showed that while Davido and his wife, Chioma have been getting a lot of moral support from family members to bear the pain of losing their only son, there has been a quiet discomfort in their Banana Island residence in Lagos.

Davido, it was also gathered, had instructed all his team including staff working for him to keep his family affairs off their lips as he would not want any unapproved information about him or his wife leaked to the public or being a subject of discourse in the media.

With his uncle, Sen. Ademola Adeleke’s inauguration as Osun State governor coming in one week’s time, nothing within the camp of the singer suggests Davido would be part of the occasion.

All the plans to celebrate the 30th birthday celebration in grand style have  been cancelled as the mood in their home remained pensive as of the time of this report.

Per Seconds News learnt that grieving Davido ought to have made an official statement about the loss of Ifeanyi but his dad, Mr Deji Adeleke reportedly told the singer to halt such plans and not put himself in the news yet.

A source who didn’t want his name mentioned told Per Seconds News that the Adeleke’s family are standing strong behind their super star son and giving him all the support he needs.

The celebrations ahead of Davido’s 30th birthday bash had started since January with the singer planning to unveil new projects and throw a big party for himself in different cities.

“He was looking forward to celebrating his birthday with his uncle’s swearing-in as the governor but all those plans have been shelved for now.

“Davido will not be going to Osun for Adeleke’s inauguration. He has instructed his team to be on ground to support his uncle in his absence,” a source said.

Many celebrities used the occasion of the singer’s 30th birthday to pray for him and wished him a strong comeback.

Many of them said they prayed that he returns with his infectious smiles.

Notable celebrities as early as Sunday evening had been posting Davido’s pictures on their social media accounts. 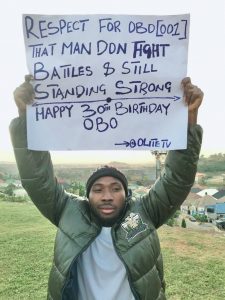 Fans of the singer have took to social media to celebrate his 30th birthday on Monday. They trended the hashtag #DavidoAt30 since Sunday, even as he has been off social media. Since Sunday, many of his fans said they would ensure he trends on social media platform today and seemed to be living up to it.

From Twitter to Instagram and even Facbook, Hashtag Davido at 30 has taken over even as many continue to show love to the Stand-Strong-Singer.

Ademola AdelekeDavido
Share
Subscribe to our newsletter
Sign up here to get the latest news, updates and special offers delivered directly to your inbox.
You can unsubscribe at any time