the whole world has come to realise that the so-called Elections, the perennial rituals deceptively sold to many countries is a delusion. 90% percent of the political and economic crises in the world are fall-outs of succession campaigns and elections 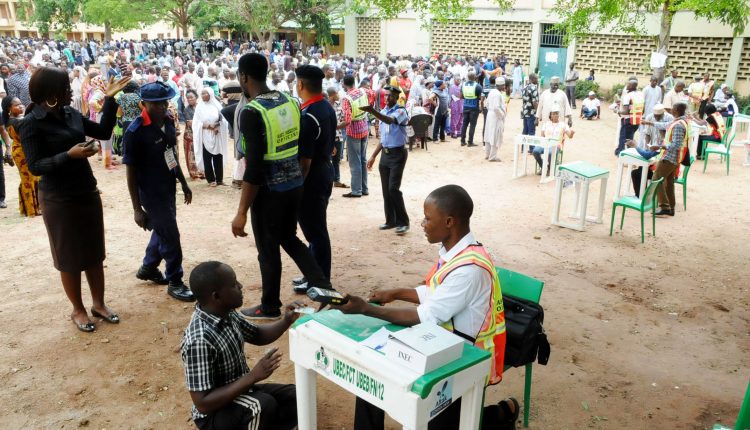 Just close your eyes for a minute and imagine with your mind’s eye, a community of slaves which is oblivious to the chains and shackles on them; imagine a pack of lunatics in a Mental Asylum who are living their life without a care in the world; imagine a people in a dilapidated house which is an inch close to collapsing and they are dancing Buga; imagine a people being robbed at gunpoint and they are embracing their traducers; just keep imagining all the horrors of this world staring a people in the face and they are preparing for the rituals of an annual festival…just imagine. That is Nigeria and its idiotic serfs for you. A country blindfolded by her politicians who have put a huge spell on her and the entire citizenry.

A blindfold (from Middle English blindfellen) is a garment, usually of cloth, tied to one’s head to cover the eyes to disable the wearer’s sight. A properly fitted blindfold prevents sight even if the eyes are open; that is what Google tells us about a blindfold, the thickest form which had blinded Nigerians, permanently.

Electioneering is the blindfold which has driven a people into unspeakable frenzy.

You may wish to take a cursory look of the country called Nigeria and the state of anomy in which she has boxed herself:

“We used 18.9 Billion to clear bushes and others” that was the testimony of the Agriculture Minister to the House of Representatives.

“CBN spent 58.6 billion to print 2.5 billion Naira notes in 2020” that was the report of the Governor of Central Bank of Nigeria.

“FG trains 177 youths in Smartphone repairs with 5.9 billion Naira that is 33 million per trainee to repair, not to manufacture” according Minister of Finance, in a shameless report to a bewildered country skinned to the bones by the government of the anti-corruption Czar, Major General Muhammadu Buhari.

“FGN purchased vehicles worth 1.4 billion to help Niger Republic tackle her Insecurity” another highly embarrassing confession by the Minister of Finance

The Nigerien suspect Hima is wanted meaning the whole defence intelligence of Nigeria cannot find the person they contracted to supply those arms.

One person from Niger 🇳🇪 stole almost N200 Billion arms money and vanished under Buhari’s government. No one has been fired or prosecuted for this mega fraud. The service chiefs under whom this mega looting occurred have been rewarded with ambassadorial appointments. The NSA is still in office.

“About 400 of the motley crowd presented with National Honour should be in prison” that was a statement made by Mallam Galadima, a one-time confidant of Buhari.

These are some of the snippets of the rot which had enveloped Nigeria in the last 7+ years. There is the issue of poverty of morality as evidenced by the characters who populate the political leadership of the country. Almost all the members of the Executive of the two largest political Associations which hold pretension to political parties have cases of serious embezzlement and stealing hanging on their necks. The chairman of APC, the party that has sentenced Nigeria to the grave, has unresolved case with the EFCC in the tune of over 12 billion Naira theft of public funds. He is just one of the many who should have been in jail in the last 10 years but who are protected by Buhari’s government. Others like him are plenty in the PDP, a party of the thorn umbrella, as well, either as governors or party stalwarts.

Inflation caused majorly by wrong–headed economic policies worsened by a deliberate ruination of the national currency, the Naira, by a ‘Yes-Man’ who is not fit to be a cashier in a civilized country, is another major issue crying for attention. Nigerians had never in the whole history of their existence experienced the crushing poverty they have been sentenced to by the Buhari junta and the yes-men and yes-women who dance round the leader’s table in a nauseating display of buffoonery.

Insecurity is as loud as the Gbedu drum. It is also the worst in recorded history. People are being slaughtered like fowls on daily basis. The butchers are known, their locations are known. Their sponsors and financiers are known. Their enablers and protectors are known. Even their short-term and long-term objectives are known. Yet, nothing has been done really, to curb the open sore of ethnic cleansing and day-light robbery of people’s ancestral lands.

People are being abducted on regular basis, vandalisation of people’s farms and routine destruction of their places of livelihood are a common occurrence. People’s wives, mothers and daughters are being tortured, raped, humiliated and subjected to slavery in the 21st century and Nigeria is supposed to have a sitting government.

Twenty million school-age children are out of school, the highest in the world. Our University education, the highest peak in the education ladder has been virtually destroyed by nonsensical arrogance of power and official impunity. Several suffering parents who borrowed hundreds of thousands of Naira to pay for hostel accommodation for their children are daily gnashing their teeth because universities are shut.

To now say, there will be an election or that people who squat in Displaced Persons Camps would be available for Population Census exercise or there would be citizens who would be deployed to conduct both the elections and census exercise is mere illusion and invidious distraction.

One wonders most times, if pauperised, terrorised and suppressed Nigerians are under a spell whenever one encounters several of them running like the drunk after politicians, the same politicians that have ruined their lives and the future of their children and grandchildren.

It should be clear to all discerning minds that a Junta that is seriously encouraging terrorism and banditry is not likely to suddenly change its tactics and allow a secure environment conducive for elections. There is a game-plan!

When megalomaniacs and terrorists like Myetti Allah suddenly keep quiet, and similar noisy bullies from, you know where, are peaceful, strategists should know that they are up to something up their sleeves. We experienced that insidious scenario in the build-up to elections in 2019.

By the way, the whole world has come to realise that the so-called Elections, the perennial rituals deceptively sold to many countries is a delusion. 90% percent of the political and economic crises in the world are fall-outs of succession campaigns and elections. This may be a subject for another day. Suffice it to say the world should come to Ibadan, the largest indigenous City in the world and learn about seamless leadership succession and inclusive, organically structured governance. Hausa Kingdoms before Danfodiyo, thrived without elections!

The masses of Nigerians had no hand whatsoever in the choice of candidates foisted on them. And all those who are jostling for the leadership of the country as well as those seeking 2nd term have had unfettered access to governance over the years, what magic did they perform, more so when they are all insulting the collective sensibility of Nigerians that they were to continue the policies of Buhari who without a doubt had epitomised the worst, the most woeful, most calamitous, most destructive government in the history of self-government in Africa?

Quite frankly, I am not bothered about politicians running up and down seeking votes. That is what ambition does to you. My people say blessed are those who take you for a ride, it is you the compound fool who allow yourself to be bedraggled that are cursed.

This house has collapsed. Is election the next thing? Is Census exercise the next thing? Is RUGA bill by the backdoor of Water Resources bill the next thing? How can you be running a country without a Constitution? How can you continue to live in a union without a mutually agreed rules of engagement? You have a hydra-headed body of a country where the head consumes more than 90% of the food meant for the whole body; what magic is there for an incoming president/governor to perform to upturn the monstrosity?

People should by themselves and for themselves tear off the blindfold. What Nigerians need today is to sit round a Round Table, dissolve the Union that had not benefitted anybody except a tiny few with ballooned cheeks, swollen bellies, Michelin-tyre buttocks and zany costumes.

This artificial temple has broken up, let’s break it down before it collapses on our heads. There is no sane person in any part of the contraption called Nigeria who honestly thinks that the Lugard’s woeful and calamitous experiment is worth saving. You know it. I know it. Even greedy, perfidious and wicked Britain can no longer save herself. Even if you surrender the geographical space called Nigeria to the 156 leaders in the United Nations to administer, the stranger-characters lumped together would not allow it to work. If Iranians, Israelis, Germans and the Gypsies of Eastern Europe are yoked together in a country, that country will explode within a month!

This blindfold must go.

Electioneering
Share
Subscribe to our newsletter
Sign up here to get the latest news, updates and special offers delivered directly to your inbox.
You can unsubscribe at any time