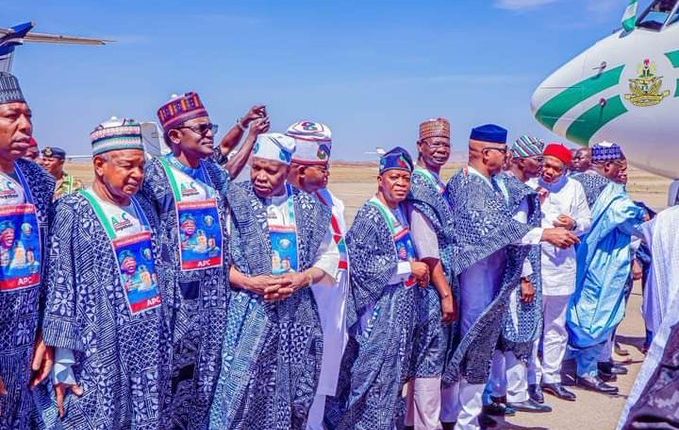 President Muhammadu Buhari, 20 APC  governors and other bigwigs flew 95 aircraft into Jos, Plateau capital, on Tuesday for the flag off of the presidential campaign of Asiwaju Bola Tinubu and his running mate, Sen. Kashim Shettima.

Of the 95 aircraft are about 32 private and chartered jets as well as helicopters which ferried the governors and other top notchers to the historic city and state popularly known as the “Home of Peace and Tourism”.

While about 17 private jets and helicopters arrived at the airport for the august political gathering, over 15 regional jets and turboprops also touched down at the aerodrome, according to the airport authorities.

Persecondnews gathered that because of parking space at the Jos airport, some of the pilots of the aircraft had to fly back to Abuja to park of about 25 minutes flight to fly back to Jos to pick  their passengers.

It will be recalled that in October at the PDP Presidential Candidate, Atiku Abubakar’s campaign inauguration in Uyo, Akwa Ibom capital, about 15 private and chartered jets flew in dignitaries.

APCBola Ahmed TinubuPres. BuhariPresidential Campaign
Share
Subscribe to our newsletter
Sign up here to get the latest news, updates and special offers delivered directly to your inbox.
You can unsubscribe at any time