The former lmo Governor bowed to the superior force of the EFCC after hours of resistance and demand for warrants of arrest by him. 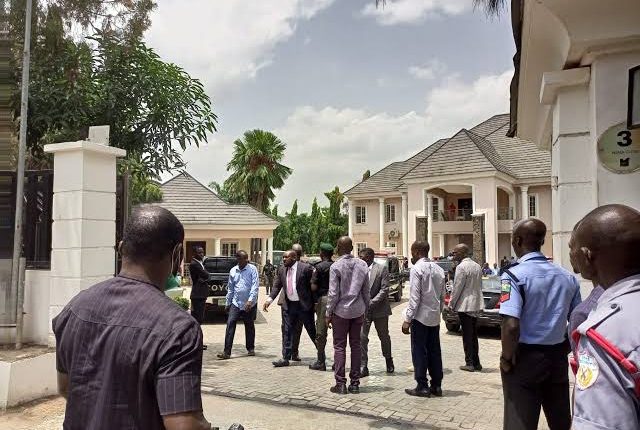 After about seven hours after laying siege to Sen. Rochas Okorocha’s house in Maitama area of Abuja, operatives of EFCC eventually took the former Governor away at 6:48pm amid sporadic gunshots and firing of canisters.

The former lmo Governor bowed to the superior force of the EFCC after hours of resistance and demand for warrants of arrest by him.

Persecondnews reports that hours before his arrest, family members blocked the entrance to No. 3, Ontario Crescent, Maitama, the palatial mansion of the APC Presidential aspirant.

Earlier, leader of the EFCC team had cone out to address the media on their mission to effect the arrest of Okoracha.

The operative, who did not disclose his name, warned loyalists of the former Governor to disperse or will be compelled to do so, a development that prompted sporadic gunshots into the air.

Few hours later, Okoracha emerged from his mansion and was taken away in a 24-seater Toyota bus with special registration no. AA 4156.

A team of security numbering about 18 effected the arrest at about 6:48pm, Persecondnews also reports.

Earlier, the spokesman for the anti-graft agency, Wilson Uwujaren issued a statement on the mission of the security operatives to Okoracha’s house.

According to him, operatives of the Economic and Financial Crimes Commission, EFCC, today May 24, 2022, arrived at the Maitama, Abuja home of a former governor of Imo state, Senator Rochas Okorocha, to effect his arrest.

The move followed the refusal of the former governor to honour invitations after jumping the administrative bail earlier granted him by the Commission.

EFCC had on January 24, 2022 filed a 17-count criminal charge bordering on diversion of public funds and properties to the tune of N2.9 billion against Okorocha.

The case was assigned to Honourable Justice Inyang Ekwo of the Federal High Court, Abuja but attempts to arraign Senator Okorocha were twice stalled owing to the absence of the ex-governor who evaded service of court processes.

In the circumstance, the Commission is left with no option than to effect the arrest of Okorocha and bring him to trial.

EFCCRochas Okorocha
Share
Subscribe to our newsletter
Sign up here to get the latest news, updates and special offers delivered directly to your inbox.
You can unsubscribe at any time