4 dead, 5 rescued, others trapped as another building collapsed in Lagos 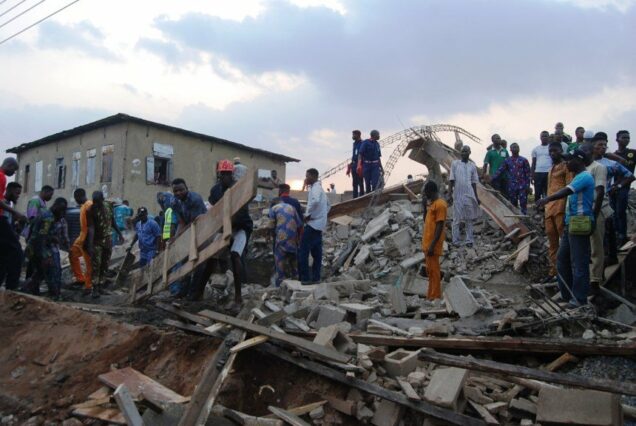 Share
By Ajuma Edwina Ameh
Barely three weeks after the ikoyi skyscraper collapsed, another building under construction has collapsed in Sunny Filled, Flour Mills Estate, Magbon in Badagry, Lagos State.
The tragedy occurred on Wednesday leaving four persons dead.
Persecondnews gathered that five persons were rescued from the rubble, while efforts are still ongoing to rescue others who are still trapped.
On November 1, 2021, a skyscraper still under construction, located on Gerard Road by Musliu Junction in the highbrow area of Ikoyi, Lagos, collapsed at about 2.10pm, killing 45 people, including the the owner, Mr Femi Osibona.
Confirming the incident, the Director, Lagos State Fire Service, Mrs Margret Adeseye, said firefighters from Badary station, raced to the scene following a distress call.
“The Lagos State Fire and Rescue Service, Badagry Station, had rescued five victims from the building that is under construction, while concerted efforts are ongoing to rescue remaining trapped victims.
“The victims, who are mainly construction workers, were rescued with varying degrees of injury, but in stable condition and have  been taken to nearby hospitals for treatment.
“However, four adult males have been recovered unconscious thus far as the Nigerian Police, Morogbo Division and the Community dwellers are complementing the efforts of the the Lagos State Fire and Rescue Service,” she said.
Share
Subscribe to our newsletter
Sign up here to get the latest news, updates and special offers delivered directly to your inbox.
You can unsubscribe at any time

U.S. President Biden directs FTC to wade into high cost of gasoline, punish any wrongdoing by oil and gas companies