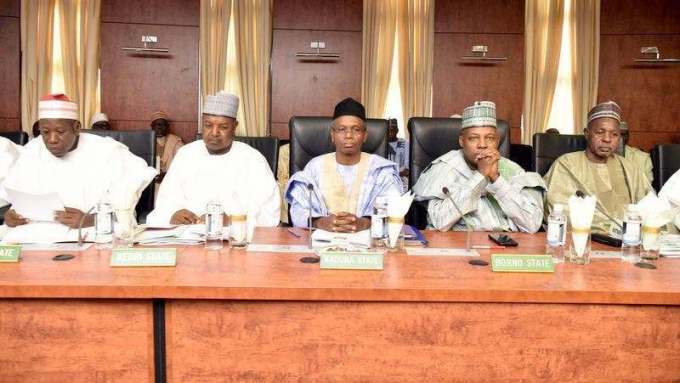 The Northern States Governors’ Forum (NSGF) on Monday attacked the position taken by the 17 Southern governors on some critical national issues including power shift to the South in 2023 and anti-open grazing laws now operational in the South.

They Northerner governors were, however, reticent on the controversial Value Added Tax (VAT) since the case is now before the Supreme Court.

They slammed their colleagues from the South that demanding zoning of the office of the President to the South is “against the spirit and letter of the constitution.’

The forum condemned the statement by the Southern Governors that the presidency must go to the South, saying the statement is quite contradictory with the provision of the Constitution of the Federal Republic of Nigeria (1999) as amended that the elected president shall:

“Score the majority votes; score at least 25% of the votes cast in 2/3 states of the federation. In the case of run-up, a simple majority wins the election.”

Rising from an emergency meeting of the forum in Kaduna on Monday, the governors said in a communique that it is sub-judice to act on the controversial Value Added Tax (VAT) while the case is in court.

The Chairman of the forum and Governor of Plateau State, Mr Simon Lalong, read the communique to newsmen.

On open grazing, the communique called on the Federal Government to expedite action on the National Livestock Transformation Programme.

On VAT, the governors said as responsible leaders while we are constraint by the fact that the matter is sub judice, we however for the purposes of educating the public make the following observations:

“Rivers and Lagos State Government had enacted their own VAT laws and the Southern Governors Forum has expressed support for this course of action.

“VAT is being confused by these state governments as a sales tax. If every state enacts its own VAT Law, multiple taxations will result in an increase in prices of goods and services and a collapse of interstate trade. VAT is not a production tax like excise, but terminal tax which is paid by the ultimate consumer.”

It added that the reason Lagos accounts for our 50% Vat collection is because most of the telecommunication companies, banks, manufacturing and other trading activities have their headquarters in Lagos with the resultant and wrongful attribution of VAT.

“Thus, the forum said until and unless the Supreme Court pronounces judgement on the substantive matter between Rivers State and Federal Government, the matter is sub judice and Northern States Governors Forum would respect this.

On the security situation in the region, the forum observed the need for a sustained synergy and coordinated efforts between the Federal and Northern States Governments.

It lauded ongoing onslaught against banditry, kidnapping and Boko Haram especially in the Northeast and parts of Northwest and the Northcentral states and urged the Armed forces and other security agencies to sustain the tempo.

2023Nigeria governorsNorthern governorsSouthern Governors forum
Share
Subscribe to our newsletter
Sign up here to get the latest news, updates and special offers delivered directly to your inbox.
You can unsubscribe at any time