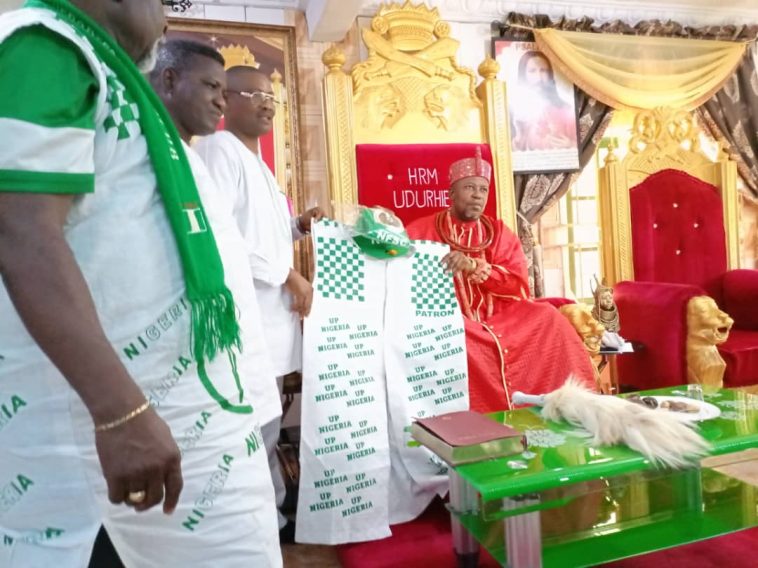 The traditional ruler of Iderhe Kingdom in Delta, King Monday Whiskey being presented with the paraphernalia of of Nigeria Football Supporters Club (NFSC) as the club's Grand Patron by the National Chairman, Rev. Samuel Ikpea on Saturday, April 24, 2021, in his Palace in Jesse Town.

The traditional ruler of Idjerhe Kingdom in Delta, Monday Whiskey, a veteran journalist, has been conferred with the Grand Patron of the Nigeria Football Supporters Club (NFSC).

The club’s National Chairman, Rev. Samuel Ikpea, who led members of the National Executive Committee and other members to his palace in Jesse town to confer the honour, thanked the monarch for his support to the club.

Applauding his wealth of experience, Ikpea conferred the title on him, presented him with a certificate and decorated him with the club’s paraphernalia after a rendition of the veteran journalist’s citation.

“We are the members of the Nigeria Football Supporters Club, and this club has been in existence since 1955. The club was formed by a Nigerian, in fact, he was a British citizen, Mr and Mrs Deji Allen.

“The club has over 22 registered chapters in Nigeria. We have chapters virtually in all over Africa, in Europe and indeed, the whole
world.

“It is the only supporters club with this type of culture. Even in Brazil, when they play football, they don’t have this kind of supporters club,’’ he said in a statement by the National Media Officer, Peter Ejiofor and emailed to Persecondnews on Sunday.

Ikpea said the club had won both the FIFA and CAF “Best Behaved and Entertaining Supporters Club Awards’’ respectively.

The national chairman noted that in all its existence, one would not hear that there had been anywhere it members had been to and were bad ambassadors of the country.

“They are well behaved, they coordinate and respect themselves, and obey the laws of the land where they go to.

“It’s an NGO. We spend our time, our money and every other thing to represent the course of this country, Nigeria.

“And we are here today to promote you above being just a mere member of the Nigeria Football Supporters Club to being our National Patron,’’ Ikpea said.

Reacting to the gesture, the traditional ruler thanked the members of the club, noting that his kingdom was due to have a football club in recognition of the talents in the kingdom.

He promised that they should count on his support when the need arises.

“So, let’s work on it, let’s capitalise on it and ensure we use it as an instrument to reach those who need help and those who need favour. There’s a difference between help and favour.

“What I will do is that as a matter of fact, anytime you need my service, do not hesitate to call on me be it within or outside Nigeria,’’ he assured them.

He also promised them that he could be used as a channel to get the things not within his immediate reach, promising that he would also use his subjects in different walks of life to assist them.

Earlier, the NFSC delegation on arrival in the kingdom marched into the king’s palace, drumming and dancing, exhibiting skills reminiscent of their displays during football matches.

They were welcomed by the traditional chiefs of Idjerhe kingdom with all the cultural embedment.