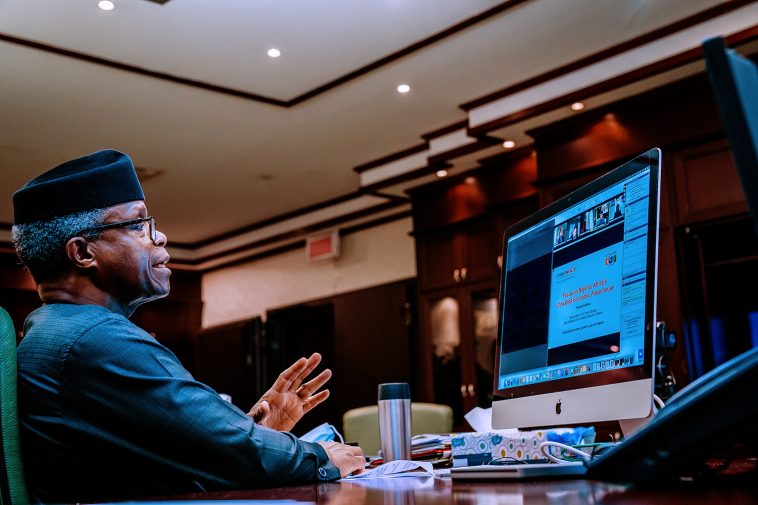 “So it should be thoughtful and knowledge-based regulation not prohibition. The point I am making is that some of the exciting developments we see call for prudence and care in adopting them, but we must act with knowledge and not fear’’

Vice-President Yemi Osinbajo (SAN) says in spite of the abuses of Cryptocurrency its operations should be regulated and not prohibited in the country.

“I fully appreciate the strong position of the CBN, Securities and Exchange Commission (SEC) and some of the anti-corruption agencies on the possible abuses of cryptocurrencies and their other well-articulated concerns. But I believe that their position should be the subject of further reflection.

“There is a role for regulation here. And it is in the place of both our monetary authorities and SEC to provide a robust regulatory regime that addresses these serious concerns without killing the goose that might lay the golden eggs.

“So it should be thoughtful and knowledge-based regulation not prohibition. The point I am making is that some of the exciting developments we see call for prudence and care in adopting them, but we must act with knowledge and not fear,’’ Osinbajo said.

He spoke at a one-day virtual economic summit organized by the Central Bank of Nigeria, the Banker’s Committee, and the Vanguard Newspapers, with the theme, “Bankers’ Initiative for Economic Growth”.

While urging the monetary authorities to have a rethink on their stand on cryptocurrencies, Osinbajo said: “There is no question that blockchain technology generally and cryptocurrencies, in particular, will in the coming years challenge traditional banking, including reserve (Central) banking, in ways that we cannot yet imagine.

“So, we need to be prepared for that seismic shift. And it may come sooner than later.”

“Already remittance systems are being challenged. Blockchain technology will provide far cheaper options to the kind of fees being paid today for cross-border transfers. I am sure you are all aware of the challenge that the traditional SWIFT system is facing from new systems like Ripple which is based on the blockchain distributed ledger technology with its own crypto tokens.

“There are, of course, a whole range of digital assets spawned daily from block-chain technology. Decentralized finance, using smart contracts to create financial instruments, in place of central financial intermediaries such as banks or brokerages is set to challenge traditional finance.

“The likes of Nexo finance offer instant loans using cryptocurrency as collateral. Some reserve banks are investigating issuing their own digital currencies.”

On national development and the public-private sector interventions, the Vice-President said to engender sustained economic growth, there was need to think in terms of scale.

“I am quite concerned when I hear that national interventions are classified as pilots involving sometimes no more than 1000 people. Given the size of our population, we cannot afford the luxury of pilot projects. We should design our interventions very carefully and then go big.

“It was quite puzzling to me when people said that our plan to build 300,000 houses under the ESP was too ambitious a target. After all, this just amount to 400 houses per local government yet many of our local governments are larger than some African countries who would not consider building 400 houses in one year as too onerous a task.

“The task of national development requires that we fire on all cylinders after all, at one stage, China was building 1.9m housing units per year over a number of years,’’ he stressed in a statement by Mr Laolu Akande, the Senior Special Assistant to the President on Media and Publicity, Office of the Vice-President, a copy of which was emailed to Persecondnews.

Harping on the need to complement the efforts of the Federal Government in bridging the infrastructure gap, Osinbajo said the Buhari administration had a track record of building roads, rail and power projects across the country.

“In spite of this commitment we are still very far away from meeting the full infrastructural needs of the economy.”

The Vice-President called for improved support especially from the private sector in the operationalization of the Infrastructure Company (InfraCo).

“The President has now approved the establishment of InfraCo which will be a public-private partnership chaired by the CBN Governor to overcome our infrastructural deficits.

“I expect that this is a project that will excite the interest of financiers and bankers and I encourage you all to lend support to make it a success,” Osinbajo said.

He urged stakeholders to pay attention to human resource development as they scale up investments in the economy.

On the country’s recovery from its second recession in four years, Osinbajo said policymakers, lawmakers and business leaders have cause to cheer the relatively good performance in the face of the negative impact of the COVID-19 pandemic.

Participants at the forum included the Lagos Gov. Babajide Sanwo-Olu, CBN Governor Godwin Emefiele, representatives of the Minister of Finance, Budget and National Planning, the founder of Vanguard Newspapers, and other bank executives.