A near fatal incident occurred on Tuesday in Calabar, the Cross River State capital, as a magistrate who donned his official regalia slumped in the company of other protesting magistrates.

The judicial officers took to the streets and marched to the Governor’s office in Calabar over unpaid 24 months salaries.

In the process, Magistrate Richard Bassey collapsed at the gate of the governor’s office.

Bassey was, however, resucitated back to life after his colleagues poured water on him before rushing him to a hospital.

No fewer than 30 magistrates employed two years ago, all fully robed, had started the peaceful protest on Monday, appealed to Gov. Ben Ayade to settle their unpaid salaries.

A Chief Magistrate, Mr Solomon Abuo,  deplored the ill-treatment meted to them by the state government.

“Since we were employed, we have undergone several screenings without payment of our salaries…the protest is their last resort.

”We will continue to protest until we are paid. This is very embarrassing, in 2020 one of the Magistrates was arraigned before a fellow Magistrate over his inability to pay rent.

“Most of us cannot pay our house rents and are now squatting with colleagues,” he said.

“Is it wrong for one to serve the state as a judicial officer ? Are we supposed to go through this kind of humiliation?”

Justice Eyo Effiom-Ita, the State Acting Chief Judge said he was aware that the magistrates had not been paid for a long time.

He said different presentations had been made to the governor but to no avail.

“The governor said he did not give clearance for their appointments. So, he will not pay them.

“Until the governor changes his disposition, there is nothing anyone can do,’’ the head of the judiciary said. 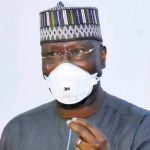