Lai Mohammed, Minister of Information
The Minister of Information and Culture, Alhaji Lai Mohammed, on Tuesday charged the newly inaugurated committee on advertising to develop a framework that will catalyze a robust audience measurement system that meets global standards.
Mohammed said it should also support the realization of the immense potential of the Nigerian Creative Industry.
The Minister, who inaugurated the committee virtually in Abuja, said the absence of a world class measurement regime had resulted in under-investment in the sector needed to foster the growth of the industry.
The Committee has six weeks to submit its report.
Mohammed said the advertising community had continued to rely on subjective factors when making decisions on the content they want as opposed to how many viewers the content truly attracts.
“Today, television platforms are subjected to renting out space on their channels to sustain their businesses, and content producers are at the mercy of sponsors which, unfortunately, skews the authenticity of their creative output in favor of a few decision makers, instead of the millions of TV viewers,” the minister  said in statement.
It was signed by Mr Segun Adeyemi, the Special Assistant to the President on Media, Office of the Minister of Information and Culture and emailed to PerSecondnews.
He stressed the need for an objective and scientific Audience Measurement System that articulates the value of the content to consumers, as well as the value of the audience to advertisers, particularly in the television sector.
For the Digital Switch Over (DSO) in broadcasting to be effective, the minister said there should be a robust Audience Measurement System to make it sustainable for Signal Distributors, Channel Owners, TV Content Producers and Advertisers.
He said: “With this task team, we are today heralding a new dawn in our Broadcast Industry. The Digital Switch Over (DSO) of our television from Analogue is now well underway.
“We are set to announce a new, accelerated agenda, in order to ensure that the DSO becomes a veritable tool to help lift the Creative Industry out of the crippling effect of COVID-19.”
He also urged the committee to identify best practice audience measurement system that will support the sustainable growth of the Nigeria Creative Industry; recommend a Framework for supporting the sustainability of the Audience Measurement System, independent of the Federal Government.
Mohammed said they should recommend a Payment and Disbursement Framework among the key stakeholders in the industry, that is, the Broadcasting Organizations of Nigeria (BON), Media Independent Practitioners Association of Nigeria (MIPAN) and the Advertisers Association of Nigeria (ADVAN).
Responding, the Chairman of the Committee, Alhaji Bello Kankarofi, described the inauguration of the committee as a watershed in the annals of the broadcast and advertising industry in the country.
Alhaji Kankarofi, who said there was a failed attempt in 1995 to set up an Audience Measurement System for the advertising industry, was optimistic that the overwhelming commitment of the Minister will drive the efforts to success this time around.
Other members of the Committee are: Mr. Obi Asika; Hajia Sa’aa Ibrahim; Mr. Mahmoud Ali Balogun; Mrs Pauline Ehusani; Mr. Tolu Ogunkoya and Mr. Joe Mutah as Secretary.
PICTURE
SHARE THIS ARTICLE 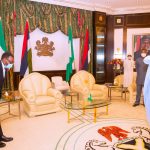 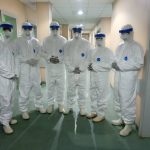