Taking the lead among the 36 states, the Lagos State Government says it will soon begin its own clinical trial of Chloroquine as cure for COVID-19 just as it has hit 1,667 confirmed cases.

As at Friday, the national figure of confirmed cases now stand at 3,912 while number of deaths increased to 117 with 679 persons already discharged.

Prof. Akin Abayomi,  the Commissioner for Health, said the trial will which begin in one or two weeks will take care of three areas — treatment, prevention and care for high-risk individuals.
It will also take care of elderly persons with underlying ailments such as hypertension, diabetes and obesity,  he told a media briefing in Ikeja.
He said the trial is sequel to the approval of the National Agency for Food and Drug Administration and Control (NAFDAC) that chloroquine could be used for the clinical trial treatment of the deadly disease.
PerSecondNews recalls that Prof. Abayomi was until his appointment as commissioner was a professor of medicine at the Nigerian lnstitute of Medical Research, Yaba, Lagos.
Meanwhile, the state has reportedly submitted its final protocol to NAFDAC awaiting approval of the agency ahead of the commencement of the hydroxychloroquine clinical trial treatment in a week or two.
Hydroxychloroquine has been widely administered to patients with Covid-19 without robust evidence supporting its use.

 
NAFDAC had on March 20 approved the use of chloroquine for clinical trial treatment of the novel disease, warning however that the approval was not for the drug to be used as a treatment for the virus.The Director-General, NAFDAC, Prof Mojisola Adeyeye, had confirmed that only Lagos State,which has the highest number of cases and is the epicentre of the virus in the country, had signified interest in using the drug for a clinical trial to find treatment for the virus.

Observational Study of Hydroxychloroquine in Hospitalized Patients with Covid-19

In an observational study of Hydroxychloroquine in hospitalized patients with Covid-19 in the U.S by a consortium of doctors

The research doctors examined the association between hydroxychloroquine use and intubation or death at a large medical center in New York City.

Of 1446 consecutive patients, 70 patients were intubated, died, or discharged within 24 hours after presentation and were excluded from the analysis. Of the remaining 1376 patients, during a median follow-up of 22.5 days, 811 (58.9%) received hydroxychloroquine (600 mg twice on day 1, then 400 mg daily for a median of 5 days); 45.8% of the patients were treated within 24 hours after presentation to the emergency department, and 85.9% within 48 hours. Hydroxychloroquine-treated patients were more severely ill at baseline than those who did not receive hydroxychloroquine (median ratio of partial pressure of arterial oxygen to the fraction of inspired oxygen, 223 vs. 360). Overall, 346 patients (25.1%) had a primary end-point event (180 patients were intubated, of whom 66 subsequently died, and 166 died without intubation). In the main analysis, there was no significant association between hydroxychloroquine use and intubation or death (hazard ratio, 1.04, 95% confidence interval, 0.82 to 1.32). Results were similar in multiple sensitivity analyses.

In this observational study involving patients with Covid-19 who had been admitted to the hospital, hydroxychloroquine administration was not associated with either a greatly lowered or an increased risk of the composite end point of intubation or death. Randomized, controlled trials of hydroxychloroquine in patients with Covid-19 are needed. (Funded by the National Institutes of Health.) 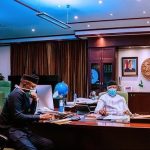