Bizzare::Man in sex romp with heavily pregnant she-goat in Ekiti 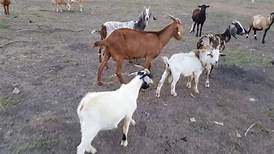 For residents of Owode Quarters in Ado Ekiti, Ekiti State capital, a bizzare act and taboo has hit their community as an apprentice, Peter David, engaged an expectant she-goat in a sex romp.

The man, playing the role of a he-goat, was caught glued to the heavily pregnant goat at an uncompleted building in the neighbourhood in the early hours of the day.

David, believed to be an indigene of Benue State, was unfortunately caught in the act as the goat continued bleating ceaselessly which drew the attention of some residents and officials of the Benin Electricity Distribution Company on duty at the quarters.

After the pounding, David’s sex partner was left in an unconscious state as it foamed in the mouth and bleed in its private parts, witnesses said.
A resident, who witness the incident, described it as an abomination.
He was, however, apprehended when he wanted to escape through A nearby river  (River Ofin).
“I was praying in the church when l heard the goat’s continuous bleating.
“About seven minutes later, I heard somebody calling my name and shouting for help. I came out and saw the man trying to escape and I caught him.

“When we sat him down, we asked him what happened and he confessed that he was having sex with the goat. For about two hours, the goat was foaming in the mouth and bleeding in the private parts.

“This is a bad omen. It is evil. I suspect the act is for ritual. There is the need for cleansing.

“Beyond the act,, all these strange diseases in the society today are from acts like this.
“The man would have contracted diseases from having carnal knowledge of the goat,” another witness said.
Persecondnews reports that Police were later invited to the scene who arrested both the “lover boy and the defiled goatband took them to the station for further investigation and interrogations.
Ekiti
Share
Subscribe to our newsletter
Sign up here to get the latest news, updates and special offers delivered directly to your inbox.
You can unsubscribe at any time