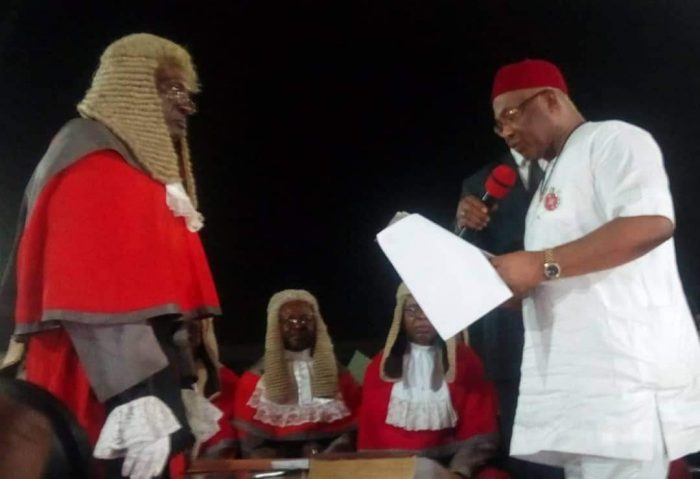 Hope Uzodinma
Following the judgment of the Supreme court, Senator Hope Uzodinma of the All Progressives Congress (APC) was on Wednesday sworn in as the governor of Imo State.
He has, therefore, given a marching order to permanent secretaries and heads of parastatals to submit award of contracts made so far in the state within four days.
 
PerSecondnews news reports that Uzodinma and his running mate, Mr Placid Njoku, took oath in Owerri as the sixth governor and deputy governor  of administered by the Chief Judge of Imo state, Justice Paschal Nnadi.
The National Chairman of the All Progressives Congress, Mr Adams Oshiomole, and the Minister of State for Education, Mr Emeka Nwajuba, were among dignitaries who witnessed the event.
Others are former Governor Rochas Okorocha, the governorship candidate of the All Progressives Grand Alliance, APGA, Senator Ifeanyi Araraume and the governorship candidate of the Action Alliance, AA, Uche Nwosu.
House of Representatives member for Okigwe South, Chike Okafor, member representing Oru West, Ohaji/Egbema and Oguta local government areas of Imo state, Kingsley Uju, member representing Nwangele/Nkwerre/Isu federal constituency, Ugonna Ozuigbo.
 
The Supreme Court had nullified the election of Emeka Ihedioha of the Peoples Democratic Party by the Independent National Electoral Commission that he did not win l”awful votes” upheld that Uzodinma won the election.
 ln his maiden speech, Uzodinma said: “Let me start by recognizing the national chairman of my party, Adams Oshiomole and former governors of our party in the state. This victory is of God. I dedicate this victory to God.
“I express my gratitude to God. In this historic moment, the judiciary stands out for important recognition. The judiciary is the last hope of the common.
“Even when they came up with technicalities the judiciary still stand firm. I thank you for your support.
I must admit the success of today cannot be successful without the party APC. The members of the National working committee.
” I say to all the good people of Imo state, the time is now to build the new Imo of our dream. This victory is for all Imo people. My victory against corruption and Victoria for justice. No-one will be.
“I shall execute the 3Rs of my administration Reconstruction, Rehabilitation and Recovery. I shall begin a reconciliation among our leaders.”
On the state accounts, he directed accountant general to submit to his office a comprehensive statement of the expenditure and income of the state within four days.
“All permanent secretaries and heads of parastatals, a comprehensive statement of contracts awarded and payments made so far and state of the contracts.
“I will allow the all arms of the government to work in the principle of separation of powers.”
SHARE THIS ARTICLE 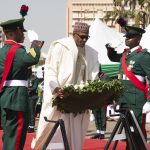 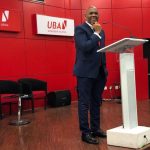