The Inspector General of Police, Muhammed Adamu, has directed the suspension of All Progressive Congress (APC), rally scheduled for Benin, Friday to welcome former gubernatorial candidate of the Peoples Democratic Party (PDP), Pastor Osagie Ize-Iyamu, who is planning to defect with his followers to the APC.

The deputy governor of Edo State, Philip Shaibu, told newsmen at a press conference in Abuja, that the IGP communicated to him in a letter, saying because he told the police chief that security of people coming for the rally cannot be guaranteed.

According to the deputy governor who said the rally was a mere disguise to disrupt public peace, disclosed that he got the letter suspending the rally at about 5pm at the Police Headquarters in Abuja.

He described as heartbreaking that the National Chairman of the All Progressives Congress (APC), Adams Oshiomhole, who referred to his father, was leading the campaign to create division within the party.

Shuiabu alleged that “the man leading the division in the state unfortunately is the national Chairman of the APC, a man I call my father.”

He, however said that he would not join issues with Oshiomhole, noting that the national chair, during his tenure as governor never tolerated what he is currently doing as he resisted similar attempt by the immediate past APC national chairman, John Odigie-Oyegun.

Shuiabu insisted that the governor, Godwin Obaseki, as the party leader is the only one authorized to do so according to the constitution.

The IGP had earlier granted permission to the APC Edo State to hold its mega rally to receive  Ize-Iyamu over 30,000 PDP members into the state.

Obaseki had said that he is not aware of any APC rally in the state just as the purportedly suspended state chairman Anselm Ojezua said neither the state governor nor other leaders of the party is aware of the rally and purported declaration rally urged members of the APC in the state not to have anything to do with the event.

Asked to react to the IGP’s permission granted to the APC Edo State to hold its mega rally, Shaibu said: “well having seen that, I had to write as the chief security officer of the state to let him know the situation in a Edo State and to also inform him in line with the party constitution, the governor is the leader of the party. And if the governor that is the leader of the party and the party that he leads wants to do a rally in his own state and he has not authorized it and he is not aware, such rally cannot take. “Also to inform him that that national chairman suspended from the state, Comrade Adams Oshiomhole, does not have the locus to preside even on issue that concerns APC as we speak.

“So, the man that must give voice to whatever in APC in terms of governance enshrined in the Constitution is the leader of the party in the state, that is the governor. So I have the letter, the IG has responded to me that based on security situation that I have highlighted, that he has directed the commissioner of police to put all security in place to suspend that planned rally by these people.”

A letter from the office of the IGP in response to the application by the State Government to suspend the rally for security reasons read thus: “I am directed by the Inspector General of Police to convey his warmest regards and to acknowledge the receipt of Your Excellency letter ODG.134/59 of December 12, 2019 on the above underlined subject. 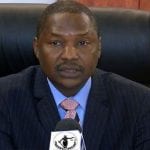