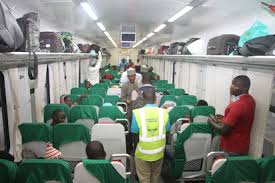 In keeping with its promise, the Federal Government has announced free train ride for commuters on the Lagos-Ibadan standard gauge line.

Transportation Minister Rotimi Chibuike Amaechi, announced this on Saturday via his Twitter handle.

For Lagos passengers, the take-off point is the Iju train station in Agege area of Lagos.

He said the free train ride as a test-run would last beyond the festive period into the New Year.
“The free ride will run through to March 2020,” Amaechi said.
He advised commuters in Lagos and Ibadan to take advantage of the free “ride to the next level”.
Read the tweets below:
Chibuike.R. Amaechi
@ChibuikeAmaechi
Our free rides on the Lagos-Ibadan standard guage rail line will begin today and run through March, 2020. Commuters on that route can take advantage of it and save on transportation during the festive season & beyond. Let’s ride to the #NextLevel
FGfree train rideLagos-IbadanNigeria
Share
Subscribe to our newsletter
Sign up here to get the latest news, updates and special offers delivered directly to your inbox.
You can unsubscribe at any time

Aisha Buhari to governors, ministers: Fear God, we shall all return to Him one day