He shot into national limelight and prominence in 2017, a blandly urbane, courteous and debonair politician of no mean stature. His life, no doubt, has been ruled by a great passion – service to humanity – both as a lawyer and politician and this has been life-spring.

Mr Boss Gidahyelda Mustapha, an attorney, businessman, management consultant and politician is the 19thSecretary to the Government of the Federation, appointed by President Muhammadu Buhari on Oct. 30, 2017 but assumed office on Nov. 1, 2017 in the president’s first term. Following his emergence on the nation’s political scene and seat of power in Aso Rock Villa, Abuja, Mustapha has been seen representing himself, the president and the Federal Government very well and discharging his duties with great panache and dexterity.

A peek into his biodata or biography (courtesy Wikipedia) shows that his background and pedigree must have fortuitously and by destiny prepared him for the various tasks and capacities he had occupied and also currently, the number three citizen in the executive arm and perhaps the eight in the Federal Government’s hierarchical order of protocol.

Mustapha, who until his appointment was the Managing Director of Nigerian Inland Waterways Authority, was born in Garaha, Hong in Adamawa State. His three-part life of early life/education, politics and profession are in focus in this write up in alignment with the three-lined road of public administration, politicking and vocation.

After his elementary education in Hong, Adamawa, he proceeded to North East College of Arts and Sciences in Maiduguri, Borno State for his high school education. He graduated in 1976 and thereafter went to Ahmadu Bello Universit, Zaria, where he received Bachelor of LL.B in 1979. He proceeded to Nigeria Law School, Lagos for mandatory one-year law class and graduated in 1980. He was called to Nigerian bar in the same year and participated in the national youth service between 1980 and 1981.

In pursuit of a career in law, Mustapha joined the chambers of the late Attorney-General and Minister of Justice, Dr Olu Onagoruwa — Messrs Onagoruwa & Co, in Lagos as a counsel in 1983. He had a stint at an Italian consultancy firm Sotesa Nigeria Limited earlier. In 1994 he set up his own law firm — Messrs Mustapha & Associates and served as its Principal Counsel until 2000. He later worked in another law firm Adriot Lex & Co. serving as Principal Consultant from 2000 to 2006.

Described by the media as a “boardroom guru”, the SGF had served on several boards of companies in the manufacturing, financial services and oil and gas sectors both in Nigeria and outside the country both as elected and appointed member.

The SGF is ranked among the cerebral professionals in politics in the country. After acquiring education at the highest level, Mustapha plunged into his professional, community intervention and political career, delivering service in various capacities. The principle of tenacity, integrity, diligence and adroitness in all facets of life and endeavour must have guided his foray into the murky waters of politics both as a lawyer and management consultants.

A large-hearted and highly detribalized Nigerian, the SGF appears to have overwhelmed the office and did not allow it to overwhelm him. To effectively coordinate the activities of government at ministerial and extra-ministerial levels, the 3Cs of Crisis, Character and Capacity must have guided Mustapha to focus on strong character ethics such as responsibility, integrity, fidelity, loyalty, courage, compassion,veracity, humility, altruistic tendencies and of course, SERVICE.

From the small corner in Adamawa, engaging in party politics even in the People’s Democratic Party (PDP) before he realigned with the progressive elements in the All Progressives Congress (APC) in 2013, he has also contributed his quota to democratic ideals and growth of democracy.

Between 1980 and 2000, Mustapha entered politics in 1980s after law graduation and between 1988 and 1989 he was a member of the Federal Republic of Nigeria Constituent Assembly, the body that drafted the Nigeria’s 1989 constitution. In 1989, Mustapha was the State Chairman of the Peoples Solidarity Party (PSP) in the defunct Gongola State; state chairman of the Social Democratic Party and ran unsuccessfully for Adamawa governorship in 1991 under the party.

Mustapha was among the seven-member committee set up by President Olusegun Obasanjo to probe Muhammadu Buhari’s Petroleum Trust Fund in 2000. The committee, Interim Management Committee, did their work but the report was never made public. Buhari had earlier resigned his position as the Executive Chairman of PTF.

In 2007 polls, he served as the Deputy Director-General of the campaign organisation of Atiku Abubakar’s failed presidential bid, he was the deputy national chairman of the Action Congress of Nigeria. The party was among the three major parties that were merged to form the All Progressives Congress in February 2013 preparatory to the 2015 general elections.

After merger of their party he served in the presidential campaigns and was among the members of the transition committee in the 2015 election that brought Muhammadu Buhari to power. He is also a member of the board of trustees of the party. 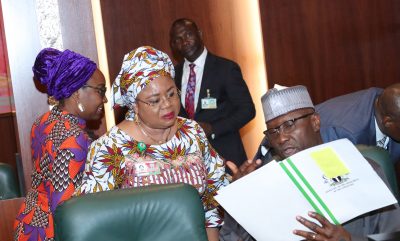 By his trajectory of life and Divine arrangement, God’s favour and fortune smiled on him and fished him out from obscurity to limelight. Mustapha has attained a number of milestones including but not limited to, a chief public servant, public intellectual, lawyer, successful businessman and consultant to companies and organizations, whom I believe found politics a good, broader and veritable canvas upon which to create effective sectional balancing and equal opportunities as well as upholding national values and policies of government.

He sees public service as the guardian of the public interest and as a vocation, he has integrated himself within the ethical frameworks that are fully attached and aligned with a larger vision of the President and the government. And as a public servant, he has applied himself to and dedicated to serving the STATE and the vision with utmost loyalty and commitment.

Through his creativity and deftness, he coordinates ministers and other top appointees, reassesses policies, deploy performance trackers and report back to Mr President; he also interfaces with governors, secretaries of state in other countries, ambassadors and regional bodies as the President’s eyes and nose. It is virtually unattainable for a President, governor, legislature or the judiciary and the Federal Executive Council to give effect to policies and decisions automatically without being interpreted in the course of the application by an administrator who will distill them in form of memo or statements to the public. And since public administration requires discretion and politics, a politically savvy, dexterous and ingenious person as SGF is needed. He carries out such decisions with scrupulousness and fastidiousness and monitor compliance.

The SGF is the President’s confidant and adviser and as technocrat, there is a modernizing imperative in his activities and actions to gain public confidence and put the machinery of government at the disposal of levels of authority for effective delivery of democratic dividends to the people.

Again, in conceptualizing and formulating the “Next Levels’’ agenda of the Buhari administration, Mustapha and others must have been fired by and taken cognizance of what American philosopher, Gary Franciona says, “If we are ever going to see a paradigm shift, we have to be clear about how we want the present paradigm to shift.’’ As the operator of the engine room of government, the SGF is clear-headed about where we were as a nation and where the paradigm shifts.

And to efficiently manage the “performance tracker and status’’ of the government, Mustapha must have been reinventing the wheel of governance and that of his office to sustain the degree and tempo of service delivery by the government through the machinery of coordination and supervision.

Worthy of note is his innate and proven capacity and expertise of deploying strategic cooperation, building alignments and bridges across the country for Mr President’s administration, navigating the “forested highlands’’ of politics in governance, meeting minds, recognizing diverse interests and present same to his Principal. Observably, since Mustapha, donning prim suit almost always, came on board, he has changed the narrative – non-pareil performance, less controversies, urbanity, witticism, hardiness, and selflessness as his hallmark.

I believe that Mustapha will in future be inducted into the Hall of Fame of great people who had served their people with diligence and candour like his predecessors.

“The things we do are like monuments that people build to honour heroes after they had died. They are like the pyramids that the Egyptians built to honour the Pharaohs.

“Only instead of being made out of stone, they are made out of the memories the people have of you. That is why your deeds are like your monuments. Built with memories instead of with stones.’’

Boss MustaphaBuhari's GovernmentNigeriaSGF
Share
Subscribe to our newsletter
Sign up here to get the latest news, updates and special offers delivered directly to your inbox.
You can unsubscribe at any time