Tony “Mr Fix It” Anenih: One Year After 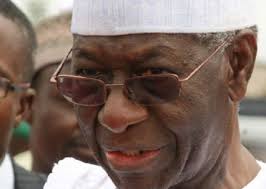 “So say it loud and let it ring; we are all a part of everything; the future, present and the past; fly on proud bird; you’re free at last.” ~Charlie Daniels, an American singer, songwriter and multi-instrumentalist

On October 28, last year, the curtains fell, bringing the life and times of the Iyasele of Esanland, Chief Anthony Akhakon Anenih, to a celebratory terminus; and so, he joyfully departed this terrestrial plane for a place in the celestial realm that typifies the future.  Anenih passed on a few weeks after his 85th birthday, which he soberly marked on August 4 (2018) in a low key-fashion.

Perhaps, beyond the economic reason that he had cited for not celebrating as he was wont to do, he had, unknown to us, begun a transcendental journey characterised by self abnegation, a detachment from the social and the worldly, for an immersion in the spiritual and the celestial. I remember how, in the twilight of his life and in his quietude, Anenih had always listened to gospel songs, his favourite being Steve Crown’s “You are Great”.

He had, in fact,  requested that the song be played for him while giving his address on the occasion of the reception he organised at the International Conference Centre, Abuja, in 2016 to thank God for giving him a second chance to live after his major heart operation in 2015.  He had taken the opportunity of the thanksgiving to present to the public his autobiography titled: “My Life and Politics”.

Those of us who were very close to the influential political warhorse knew that the colossus would one day go the way of all mortals. We carried on and helped him to play his part well while here. We contributed our little quotas in helping him to define his eon with the magnitude of his politics.  At different intersections, he had the benefits of having committed men to work closely with him in government and out of government.  In politics, where he became something like an avatar, he had tended to the needs of his tribe of loyalists, becoming a formidable rallying point.

The exertions that came with that responsibility were not going to last forever, though. Yet his expected transmutation at some point, when it came on October 28, 2019, was like the passage of a Comet. He left behind a body of legacies in business and politics. It was in politics that he cut a national niche for himself. But interestingly, it was in politics that he was caught up in the fundamental contradictions of real and imagined identities.

Certainly, it was not an identity crisis.  It was a crisis of perception by the significant others, which manifested in the garb of a somewhat deconstructed persona.  This was a comfortable resort to those who were at the receiving end of his political legerdemain; they were quick to deprecate and demonise him as “Mr Fix It”.  To those who were beneficiaries of his eleemosynary acts, he was a benevolent political leader who was touched with the feeling of their infirmities.

It was thus not surprising that a rash of controversies was spawned around his personality and his politics. The contextualization of his personality within his politics or vice versa had brought him fame; it had also brought him scorn. In keeping fidelity with the obligation to document his odyssey for posterity, he had through the medium of his autobiography summed up his essential politics, clearing a  number of misconceptions in some quarters.

From his foray into politics in the second republic where, as State Chairman of National Party of Nigeria (NPN) in  old Bendel State, he was instrumental to the emergence of Samuel Ogbemudia as governor the State, Anenih’s tactical role in politicking and electoral matters received public approbation and appreciation subsequently.

His functionality would later receive further validation as Chairman of the Social Democratic Party (SDP) under whose leadership Chief MKO Abiola won the June 12, 1993 presidential election that was annulled by the General Ibrahim Babangida’s administration. His leadership was understandably harangued by some persons who felt that the SDP leadership traded off Abiola’s mandate. Anenih’s autobiography serves as his living voice in the eternal controversy and complex narratives that will continue to dog the annulment of the June 1993 presidential election, regardless of the fact that the President Muhammadu Buhari administration has declared it as Nigeria’s Democracy Day, instead of May 29.

Anenih’s role in Nigeria’s presidential politics was writ large.  It continues to enjoy historical reference even after his demise. Posterity will glean from historical accounts how the retired Police Commissioner turned businessman-politician rose through the haze of the nation’s cloak and dagger politics to become an executor of campaign and electoral strategies that had, in the fourth republic, produced as presidents, at different intersections, Olusegun  Obasanjo, the late Umaru Yar’Adua and Goodluck Jonathan.

Like an Octopus, Anenih’s ubiquity in the nation’s political waters was legendary.  His political opponents loved to hate him; whereas, his political circles had always found comfort and strength in his leadership.  He was always trusted to deliver. Where he was not trusted to deliver, and thus denied the free reins to assume the command room, the result had always been disastrous.

To appreciate, somewhat, the politics of Anenih and how he deployed his deftness in moderating the dialectics that it produced, a run through his autobiography would provide some understanding. The autobiography represents the essential summation of Anenih’s political trajectory. In a most significant way, Anenih had, before his transmutation, defined his eon with the enormity of his politics.  His moniker as “Mr Fix It” measures the complexity of the narratives that were woven around his individuality as a consequence.

Without a doubt, Anenih meant different things to different people.  Like the proverbial elephant that was subjected to the appreciation of some  blind folks, his persona continues to be differently described, dependent on the part that each blind person was able to touch.  It was interesting that it was in his departure lounge of life that he made the greatest impact on party politics in Nigeria and also on humanity.

Anyone above 70 years is considered to be in the departure lounge of life.  But Anenih became Minister of Works and Housing in 1999 at the age of 66.  He was a standard bearer of an enduring leadership that played an influential role on the political turf until 2015 when Nigeria witnessed an unusual outcome in that years’ presidential election.

To be sure, Anenih enjoyed the grace of good health. He was therefore able to ply his political trade without much difficulty.  He was consistent and persistent to the end. At 82, after stepping aside as Chair of the Board of Trustees of the Peoples Democratic Party (PDP) following the defeat of President Jonathan by President Muhammadu Buhari, he had a major heart surgery that slowed him down. He survived the 23-hour operation in a UK hospital where he was dubbed the “Miracle Man”.

Since no one can cheat nature, at over 80, the body and the elements within would naturally and steadily depreciate. That became the lot of the Iyasele of Esanland until the domestic accident that culminated in his transition.  On Monday, 28, 2019, the Anenih family holds the one-year remembrance thanksgiving Mass at St. Anthony Catholic Cathedral, Uromi and a reception in the family house at Uzenema, Arue, Uromi, thereafter in his honour.

The late Chief Anthony Akhakon Anenih left behind good legacies for posterity and continues to live in the hearts of those of us that he affected positively with the fountain of his humanity. Rest in peace, Owaren!

·      Ojeifo contributed this piece from Abuja via ojwonderngr@yahoo.com

Tony “Mr Fix It” Anenih: One Year After
Share
Subscribe to our newsletter
Sign up here to get the latest news, updates and special offers delivered directly to your inbox.
You can unsubscribe at any time